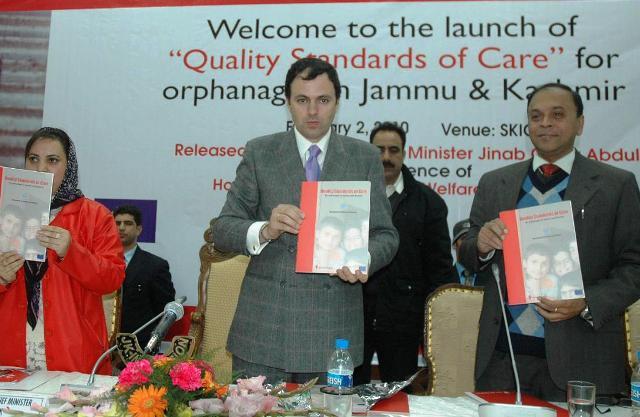 Srinagar, February 02 (Scoop News) – According to a survey by UNICEF, about one lakh (100,000) children are estimated to have been rendered as orphans in Jammu and Kashmir during the past two decades.

This was stated by J&K Chief Minister, Omar Abdullah while launching ‘Quality Standards of care for orphanages in Jammu and Kashmir’ at a function held at SKICC in Srinagar this evening,He said that while some orphanages and trusts are doing a good job, several are just collecting money in the name of orphans and there is need for bringing improvement in the functioning of such institutions.

Omar said that those who lose their parents at a young age alone do experience the sufferings and all of us should put efforts to bring smiles back in their lives. He said, like parents we should provide them the opportunities to excel in all fields.  He said that we can identify the ones among the orphans who have the potential in varied fields so that they can excel in life.

He said that after launching of the quality standards of care for orphanages, the onus lies on the Social Welfare department and other concerned to implement these guidelines without any bias or discrimination and work for welfare of the orphans and destitute. He said that a frame work should be evolved were the role of government, NGOs and community is defined as far as the welfare and care of orphans is concerned. He assured of all support to realize the dream of cheering up the lives of such children is concerned.

Omar Abdullah said that it is a moment of joy that Jammu and Kashmir is the premier state in the country where these quality standards of care for orphanages has been launched.Omar also called for constituting a Task Force headed by Minister for Social Welfare and including reputed prominent NGOs, besides Save the Children and other humanitarian organizations to give suggestions for improving community care mechanism aimed at welfare of orphans and other destitute children.

He also distributed cheques amounting to about Rs. 5.50 lakh among beneficiaries under National Family Benefit Scheme and Rehabilitation of Militancy Affected Families.

Minister for Social Welfare, Ms. Sakina Itoo who also spoke on the occasion, said that it is the responsibility of the society to take care of the orphans. She said that the children are the future of the nation and all of us must strive to care for them and help development them into useful citizens. She said there is scope for improvement in Bal Ashrams and Nari Niketans.