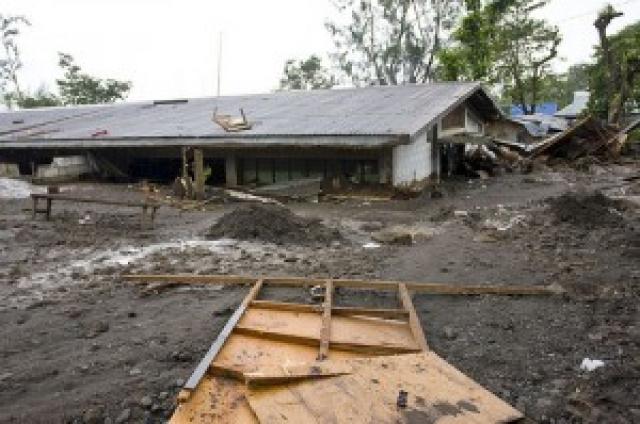 Two deadly storms struck Philippines in the last two weeks killing more than 500 people. The first storm triggered the worst flooding in Metro Manila and nearby provinces. The flooding disaster affected more than 3 million individuals. The second storm tragedy unleashed massive landslides in the northern part of the Philippines. It also forced several dams to release large amounts of water which caused unprecedented flooding in several provinces in the north.

Aside from using the internet to help flood victims, Filipino netizens are sharing their thoughts on the relationship of the recent natural calamities and the reality of climate change. A landslide caused by Typhoon Ketsana in a village in Pampanga province. Photo by Flickr user susancorpuz90

1) climate change is a real problem that affects all of us and is critical in the short and long run, as we’ve just witnessed; 2) clogging our rivers and canals with waste products that aggravate flooding is our own doing and NOT an act of God; 3) denuding our forests causes mud-slides that causes death as we’ve experienced once again…and again…and again;

Now it is imminent, the effects of Climate change is already affecting people’s daily lives… the Government should impose stricter policies to help prevent continued denudation of the forests, initiate better garbage collection and disposal thru the local governments as well as have mass cleaning and re-forestation projects. The government should be busy on helping the nation instead of being more of a liability as what many Filipinos perceived them to be.

goIloilo.com fears that several cities in the country would be uninhabitable because of climate change

I’m afraid that this may be a permanent and ever-worsening affect of climate change which may make large parts of the Philippines uninhabitable. Low-lying river front cities such as Manila and Iloilo (and many others) may be especially hard hit.

Because of the twin flooding disasters, Better Philippines notes that there is an increased public awareness about the dangers of global warming:

If there’s one good thing to come out of the ordeal caused by tropical storm Ondoy it would probably be an increase in awareness among Filipinos of the dangers of climate change and global warming. It would really be such a shame if in spite of what has already happened Filipinos would continue to be ignorant or worse unmindful of the fact that the environment is changing.

It should be clear by now that a lot of adjustments have to be made not only by the government but by ordinary citizens as well to ensure that a similar calamity of this magnitude would not happen again.

Embrace life observes that many people are now beginning to understand the need to prepare for weather disasters:

In life, there is always a lesson learned after the storm. Now, the people are monitoring the weather condition. Some evacuated already in a higher grounds…We can not prevent natural calamities but we can do something to survive. Brace for stronger and heavy rainfall in the future due to climate change but let us all prepare ourselves to face such emergency.

Control Yourself echoes a similar point:

This isn’t just about the need for relief, this is also about climate change…The past few days have been really eye-opening for me. In the end, it’s not about whether or not these disasters happen. It’s about doing something to prevent them from happening, or at least slowing down the inevitable.

Slingshot Journals appeals for an efficient use of disaster funds:

The wrath of Ondoy is a message (a big, hurtful, devastating message) that we Filipinos should take into heart. It is a message to our leaders: that climate change and environmental protection is now and will be the most pressing concern in the near future; that budgets meant for disasters and MEANT to be spent in disasters; that they should moderate their greed and spend the people’s money in matters of their welfare and safety.

It is also a message to our countrymen: that it is about time that we change our current ways of life and give a little to preserve nature; that we as Filipinos start to unite and be as one family in helping each other and be with one another.

We cannot be apathetic or cynical. We as a people have the solemn duty to accept the reality of climate change, to study it, and to take a stand.

Bloggers Kapihan thus calls on Filipino bloggers to take time out on Oct. 15 to post your thoughts and aspirations, frustrations and hopes, photos, videos and stories, on climate change and how it affects our family, community, country and the globe, and how we wish to make things better