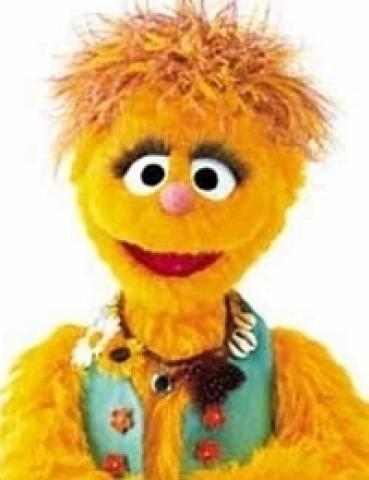 As the children’s show Sesame Street celebrates its 40th anniversary this month, premiering its new season today, one cute and cuddly Muppet on its South African edition continues to help combat and raise awareness about HIV/AIDS.

While Sesame Street is seen in over 140 countries, each version addresses local issues and has different Muppets. Golden-yellow Kami made her debut on the South African Sesame Street co-production, called Takalani Sesame, in 2002 in response to the country’s HIV/AIDS problem. The world’s first HIV-positive Muppet, she helps educate kids about the disease and confronts issues related to being HIV-positive. The name Kami is derived from the Setswana word “Kamogelo,” meaning “acceptance.” Sunshinestar110, blogging on U Don’t Like My Opinion…That’s Fine! talks more about Kami:

“Kami is a healthy HIV Positive, affectionate 5 year old orphan who is a little shy but quickly joins when approached in a friendly way, She also knows a lot about HIV, she lost her mother to the disease. When Kami was unveiled, with her mop of brown hair and she also wore a vest, wandering onto Sesame Street and wondering nervously if the residents will want to play with her. She didn’t have to worry because the other Muppets enthusiastically welcomed her.”

Kami was introduced to help the many children in South Africa who are dealing with the HIV/AIDS crisis. South Africa is believed to have the highest number of people infected with HIV in the world — an estimated 5.7 million people. Approximately 280,000 of those infected are children 14 and younger and there are 1.4 million orphans in the country due to AIDS. In addition to the physical complications of having HIV, there’s also the stigma and taboo that comes with having the disease, which makes it harder for people to receive adequate treatment and support. Takalani Sesame, which incorporates all 11 of South Africa’s official languages, tries to help children address some of these issues head on through Kami.

However, there was much controversy when Kami was introduced, particularly in the U.S., as many were outraged that a children’s show would feature an HIV-positive character. Haven on Earth elaborates on the debate:

“Although it was reported that Kami’s arrival on Sesame Street in South Africa was welcomed (I have a hard time accepting this as fact because of the still high level of denial still there), there was definite controversy here in United States. I remember reading about this (which is why I was so pleased to actually encounter a show airing while in South Africa – it would have never occurred to me to look for it). Apparently a group of Republican congressmen sent a letter to the President of PBS (Public Broadcasting Service) that airs Sesame Street. The letter protested that plans to introduce a similar HIV-positive character in the United States in due course were inappropriate, given the age of the audience. They suggested that such a move might threaten public funding of PBS [Public Broadcasting Service].”

Kami has never appeared on the American Sesame Street, though she has proven to be a very successful character on Takalani Sesame and beyond. In 2003, UNICEF appointed her as a global “Champion for Children.” In this video, she joins former U.S. president Bill Clinton to deliver a message about HIV/AIDS. Jamie, blogging on No day but today…, discusses Kami’s other successes.

“Since most South African children know someone who has AIDS, the character has become a national hero, beloved by the country’s people. Kami has appeared at the United Nations and the World Bank and was interviewed by Katie Couric. She has also been named a UNICEF ambassador for children and has appeared in Takalani segments alongside Desmond Tutu and Nelson Mandela.”

Despite Kami’s success, some bloggers still believe that she’s not an appropriate character for the American version of Sesame Street. Emily Meyer, blogging for her honors class, says:

“Although it is important for Americans to know about HIV/AIDS and the seriousness of the diseases, I think teaching kids at the ages of two and three is a little extreme. Children this young would most likely not understand about HIV and would not understand its consequences. If Kami was to be introduced in the United States as a way to spread knowledge and combat AIDS, I do not think the intended results would occur…Kids in America are not forced to deal with the issue of HIV/AIDS at that young of an age. I think the appropriate time for kids in America to learn about the seriousness of HIV is when they are older, about ten or eleven years old or when the student becomes sexually active”

Still, many bloggers, such as this one writing on Muppets and History, see Kami has another example of how Sesame Street has pushed the boundaries. Others profess their love for the Muppet and the message she brings to children. And still others think she should be introduced on other versions of Sesame Street. On her personal blog, Steisha Pintado says:

“She shows children that it is okay to hug someone who is HIV positive, and she explains what to do when she has a cut on her finger or if you have a cut yours. She teachers her young audience about coping with illness and loss…Even though sex is never mentioned when talking about Kami’s condition, some people have said that having an HIV positive character would be inappropriate for a young viewing audience. One legislature even claimed that the Sesame Workshop would lose its government funding if it aired a program with such a character in our country. It is so shocking to hear these words. Parents spend less and less time with their children, and allow the television to educate them more and more. So obviously many parents aren’t teaching their children how to handle delicate subjects of awareness and acceptance. Parents have already allowed the Sesame Workshop to introduce acceptance with those who have disabilities and illnesses, and also with those who are a different race or religion. How is this any different?”

Promotional Link: On a side note, help prevent AIDS from spreading by learning more about local HIV testing options.

Filed under: World
Share Tweet Pin G Plus Email
previous article: J&K CM in London said whole world is unanimous of the fact that Kashmir is heaven on the earth
next article: Denmark’s Immigrants Offered Money to Leave Country