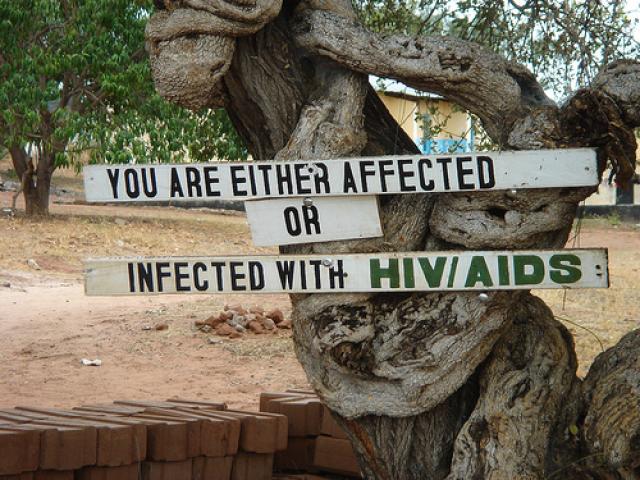 Agnes Kouakou is a 36-year-old widow and mother of two boys aged 3 and 5. She lives in Abidjan, Ivory Coast, where she met and married Francis, the man she converted to Christianity some years earlier. They loved each other and managed their modest incomes, but when Francis landed a better job with a better pay, his attitudes changed.

He began dating young girls and spending weekends outdoors while his family waited at home praying for him. Suddenly he fell sick and was diagnosed HIV- positive. The doctors called in his wife to undertake the same test, unfortunately too, she had long contracted the virus; and the family was headed for doom but thanks to God who saved the lives of the two young boys – their tests showed them HIV-negative.

During his last days on his hospital bed, Francis couldn’t stop shedding tears of contrition watching how his wife laboured to mother him. “Dear, I caused it all. If I’d been faithful to you we wouldn’t have been here. Please, forgive me and take care of our lovely boys.” He had beseeched his wife as he succumbed a day before their oldest son turned four.

Now an AIDS patient and an impoverished widow, Agnes lives the fate of a thousand housewives in Africa who are faithful to husbands who aren’t faithful to them. Tradition, religion and society forbid them disentangling themselves from the ‘horrible marriage’ marriage in which they’re stuck. At night, they accept to go to bed with a husband who has just returned from a suspicious night-outing. They dare not say ‘no’ or insist on the use of condoms. They’ve been married legally and bound to serve with their body.

“This is modern polygamy”, explained, George Amokan, a social scientist at the University of Legon, Accra, Ghana. “Owing to the fact that the olden days polygamous family setting is currently being frowned upon by today’s African socio-religious societies, African men – young and old, rich and middle-class, have adopted a new fashion of quelling their ‘eternally insatiable libido’. This they do by aligning mistresses and girlfriends to supplement their legally married wife. They spend sometimes more of their earnings on these outside women, who also in most cases, have their own secret lovers.” Mr Amokan said.

The biggest question here is safety. Thinking marriage would keep them safe from the dangers of promiscuity; these housewives are realizing how exposed they are even married – much graver than when they were spinsters, capable of fleeing or breaking any relationship they perceive short of true fidelity.

But now, it’s no longer easy. They’ve been sworn into a ‘for-better-for-worse’ circle in a continent where not only religion, but extended families too, flatly dismiss any reason for a divorce. A divorcee carries a stained reputation, no matter what made her quit her husband. The entire society sees her bad and no longer willing to stamp her with a recommendation for a future remarriage. And as we know them, African women detest being despised even when they’re down right with their decisions.

Consequently, they stay put in a marriage visibly haunted by the threats of STDs (Sexually Transmitted Diseases). To whom would they turn to for counsels? Béatrice Zongo, a 42-year-old trader from Bobo, Burkina Faso, said her own mother advised her never to quit her womaniser husband. “My mother said in her time, her husband also womanised but she didn’t divorce him and today, she had succeeded in preserving their marriage. That if she had quit, one of those mistresses would have taken her place as the housewife.”

But perhaps that was olden times when life was safer. There wasn’t the reality of HIV-AIDS. Today, there is the utmost need of ‘double-protection’ which simply means protecting oneself and making sure one’s partner protect themselves. Safeguarding oneself and permitting one’s partner to lead a loose life is not a sane protection, because any evil that befalls them may trickle down home.

“I begged him to save his life and mine by using condoms whenever he goes out with his mistresses…I had to since he refused to be faithful.” Elise Tofonde said of her husband, a 52-year-old Togolese businessman with whom she has five children.

Acknowledging a husband’s promiscuity and admonishing him to think life by opting for safe-sex is a simple strategy that gives a sigh of relief, according to some women interviewed for this article. But, lovemaking as we all know can be tricky, slippery and uncontrollable. Would these housewives be there to verify if their husbands truly wore a condom?

“It’s a senseless admonition.” Lamented Doriane, a 45-year-old mother of three from Tanzania. “How can you encourage your husband to continue in promiscuity in the name of a ‘saving’ condom?…Definitely, he would agree and even cherish you more for quitting the role of nagger to a counsellor. But what about the consequences? Should he come with a disease; should he come with the news of impregnating a girl; should he come to tell you he’s met someone he loves more than you and calling for a divorce?” Doriane explained.

Clearly, most of these housewives are still in a quandary about their future as married women. There exists an intense conflict in the soul. Should I quit to save my life? If I do, what about my kids that he would definitely seize? How would my own family regard me henceforth? Could I ever remarry?

And then, what if I stay put and he comes to infect me with the dreaded HIV? My life and my ambitions would be over. Neither my family nor the society I fear not to offend could heal me of AIDS. Therefore, what should I do?

The only somewhat reasonable solution eked out was: “Choosing and getting married to a God-fearing man; and then, staying prayerful all through your married life.” According to Josephine Oloye, a 62-year-old mother and grandmother from Ibadan, Nigeria.

But Francis, Agnes’ late husband was a Christian. How come he messed up? Perhaps Agnes was not praying enough.

These fears express the volatile sexual attitudes of men. Women have experienced the oddest – the most trusted husband becoming the worst villain. But so long as we cannot probably exist in isolation while banning the opposite sex, we’re bound to embrace love, marry and procreate. Whatever erupts from it is life, and such is life!