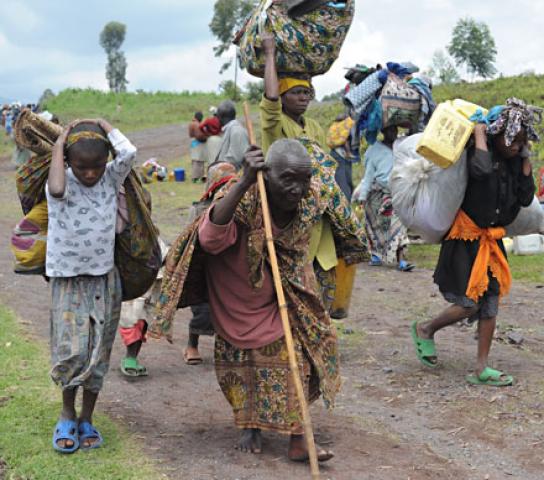 As the world celebrates Barack Obama‘s victory as the next president of the United States, AfroSpear reminds us that the conflict in the province of North Kivu in the Democratic Republic of Congo hasn’t stopped:

In this era where a man of African descent has secured the throne of the most powerful nation of the world, a tragedy of enormous proportions continues to be played out in the Democratic Republic of Congo. It is indeed easier to sell a “message of hope” in political change to cure what ails us… than to “commit to action” so as to change a situation of recurring despair and destruction.

At the Untold Stories blog from the Pulitzer Center on Crisis Reporting, Michael Kavanagh writes from Goma:

There are now more than one million people who have fled their homes in North Kivu, and very few are receiving any humanitarian aid. Before last week’s fighting, most were getting by through the generosity of neighbors who hosted the displaced in their homes and yards and farms. Now those host families are displaced, too. People are fleeing into forests, to churches, to schools […] Villagers of Kibati fleeing towards Goma after fighting in the area. Photo by Julien Harneis

Last Friday, November 7th, regional African leaders meeting at a United Nations-backed summit in Nairobi called for an immediate ceasefire in eastern DRC, and the establishment of a humanitarian corridor so that the hundreds of thousands of people displaced by the recent crisis can get the assistance they need. The summit, hosted by the African Union (AU), brought together DRC President Joseph Kabila and President Paul Kagame of Rwanda, which borders North Kivu, as well as the leaders of Kenya, Uganda, Tanzania, Burundi and South Africa.

Already on October 29th a ceasefire was announced unilaterally by the CNDP, the rebel force led by Laurent Nkunda. However, even as the summit was taking place, there were reports of heavy clashes between FARDC (the Congolese army) and CNDP in a number of rural areas including Kibati, about 9km north of Goma, leading to further displacements. Dawn Hurley, an American Expat in Goma, comments on the situation:

Nkunda claims that he has not broken his self-proclaimed cease-fire and that he has merely fought off attacks from the government. But this distinction is hard to understand at best. Nkunda’s rebels have taken two towns in the North, forcing the population to flee further. They have also retaken the town of Kiwanja. The town of Kiwanja was under Nkunda’s control until Tuesday when another rebel group allied with the government retook the town in a surprising show of power. This lead to bitter fighting between the two groups, and eventually Nkunda’s rebels reclaimed the town. However there are wide spread reports that many civilians were killed by Nkunda’s forces as they reclaimed the town, apparently in a retaliatory fashion.

Meanwhile, a preliminary fact-finding mission from MONUC visited Kiwanja, north of the town of Rutshuru, after receiving reports that several civilians were killed there during the fighting including a Congolese journalist, Alfred Nzonzo Bitwahiki who worked for the community radio Ushikira (Racou). Colette Braeckman, a Belgian journalist and author of several books on Central Africa, wonders:

Civilians being massacred practically under the blue helmets’ eyes, helpless or indifferent to it: is Kiwanja going to be the Congolese Srebrenica? In order to document what is happening right now on the ground, on Friday the Ushahidi has deployed its software to the DRC after successfully using it during January’s post-electoral violence in Kenya and in May during the xenophobic attacks on immigrants in South Africa. Ushahidi, that means “witness” in Swahili, is a tool that allowes anyone to submit crisis information through text messaging using a mobile phone, email or web form, and to visualize it on a map or timeline. The phone number to send the SMS reports to is +243992592111 and the site to view the reports is http://DRC.ushahidi.com.

One of the incident reports that can already be found on the DRC Ushahidi page refers to the killing of a local journalist in the Kiwanja area:

One of our facilitators for community radio (Ushirika) was killed in Rutshuru.

The Kiwanja Nehemiah Committee president has fled, the parish is more insecure.

We have had some contact with Kibirizi, but phone contact there is difficult. I’m in permanent contact with the Nehemiah Committee in Kiwanja and Rutshuru. Our superviser has been visited three times in a row by uniformed men in his house in Kiwanja.

For more reports from the ground, see this blog post by aid workers from the International Rescue Committee in North Kivu, or this diary of another aid worker in the area at the Alertnet blog.

A few days ago, the BBC’s Africa Have your say asked its audience “Why can’t DRC keep the peace?”. Here’s a small selection of the answers given by Congolese readers:

The whole problem stems from the DRC government in the 1990’s not fulfilling their promise to hunt down the killers during the Rwandan Genocide. They promised Rwanda they would hunt down and kill those Hutu’s who fled into Congo that took part in the genocide and they never did. Rwanda and the rebels were forced to take matters into their own hands because of the poor leadership in Congo which backtracked on their promise. I love my country but our leadership is hopeless.

DRC can have peace only when her leaders develops political will to end war. It seems kabila is enjoying to have insecurity in that part of his country so as to scare off polical opponents.

The international community has been risponsible for the Hutus crossing the borders after the genocide, why shouldn’t the same community sort out this mess?

Michelle F. of the Stop Genocide blog also has her say on how to keep the peace in the DRC:

If some degree of security can be established in the Eastern DRC, it will not be sustained without serious reforms to the Congolese military. The FARDC, beyond being under-resourced and generally incompetent, is responsible for some of the worst abuses committed against Congolese civilians, including enthusiastic participation in the brutal epidemic of rape that has become a hallmark of the conflict.

Speaking of the much-publicised problem of rape in Congo, Michael Kavanagh of the Pulitzer Center for Crisis Reporting things that journalists and activists write about it “a lot more than they write about the war”. And he adds:

The problem with much of the reporting on sexual violence in Congo – my own included, sometimes – is that it lacks context, often because the context is so complicated that journalists and editors decide to gloss over it.

But it needs to be said over and over: rape in Congo is a direct result of the conflict. Rape cases skyrocket after fighting and near frontlines; when fighting dies down so do the number of rapes. Rape is an epidemic born from violence, not an endemic part of Congolese society. The only way to “Stop Rape” is to end the war. It can only happen in that order.

As I was walking around Goma I talked with young one man, who perhaps best summarized the mood of Goma. I asked if he was scared.

He replied “Fear is a luxury for the rich.” If you are poor, what does it matter if you are afraid? There is nothing you can do about it. You can’t run away, you can’t change anything. You just keep on living. What is the point of being afraid?”

For a comprehensive list of background briefings and policy recommendations on the DRC, as well as ideas for action, see the Individual Responsibility to Protect blog.

Filed under: World
Share Tweet Pin G Plus Email
previous article: Suicide Attack at Closing Ceremony of Sports Stadium in Peshawar
next article: At the Frontline of Taiwan’s Protests