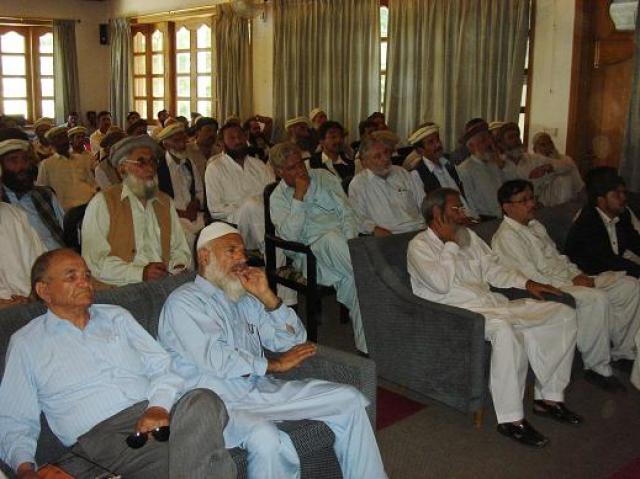 CHITRAL:  Pakistan Stone Development Company (PASDEC) held an awareness workshop in a local hotel of Chitral. Member from National Assembly from Chitral Prince Muhayuddin was chief guest on the occasion.  The ceremony was started from the recitation from Holy Quran. Addressing in introduction session Toofiq Ahmad said that main objective of the workshop is to create awareness among the mine owners and to open more and more quarry. He said that we want to inaugurate a model quarry of marble at Broze where federal Minister for Industries and production was chief guest but due to cancellation of PIA flight he could not reached to Chitral and the ceremony was postponed for a few days. He said in his presentation that due to using of un-skill methods and orthodox way some 85% of stone is wasting he displayed model quarry of other place as well of international level where very less stone is wasting and maximum stone is utilizing by cutting in cake and square shape. He said that PASTEC want to aware the mine owners to use and adopt latest devices for excavation of stone and marble so to utilize maximum stones. He said that we also arranged mosaic training for women folk to enable them for gaining their livelihood with a honor way. Some 250 people were trained in this field. Maulana Qadir Shah president Pakistan Mineral Association stressed on involvement and engaging of local people so as to benefited them in this field. He said that Chitral have rich potential of water resources and can generate 25000 mega watt electricity as well as feasibility report of 5000 Mega Watt has already been completed by GTZ a German based organization.

Former District Nazim Maghfirat Shah also stressed upon the government to provide facilities to lease holders and  mine association so as to promote this sector causing for job opportunities to inhabitants of this backward district. Lutfur Rehman general Manger finance also briefed the participants about aims and objectives of this program. He said that you should to encourage investors in this field and never causing for hurdles in the way of development. He said that you never develop until you tolerate other people and always think positively. He offered to local people to submit more and more application to PASDEC which would be process and if more quarries were selected in Chitral we will play a vital role to provide them latest machineries. He said that there are only two quarry in Chitral but some 300 quarries existing in Bunir district. He stressed upon the local people to forward and submit maximum applications which would be analyzed properly and quarry would be selected if they fulfill our criteria. General Manger of PASDEC project Mirza Nasir Baig told this scribe that we want to promote this sector and maximum quarries opened in Chitral to bring economic revolution in the lives of Chitral people. GM also responded to the questions of participants during question answer session. A large number of people belonging to mine association attended the program.

On the first and inaugural day of 3 days Shundor polo festival first match was played between Gobor and Laspur polo team.  District Officer Revenue and Estate  Akbar Jalal was chief guest on the occasion. Gobor polo team scored 5 goals while Laspur polo team scored only 4 goals and thus Gobor team declared winner team while Laspur team runner up. A large number of tourists from all over the country were present on the occasion. Shundor polo festival is continue during the first and second day two matches would be played while on the final day of the festival only one match would be played on 9th June. Federal Minister for Tourism Maulana Ataurrehman and provincial tourism minister Syed Aqil Shah also have reached Chitral.