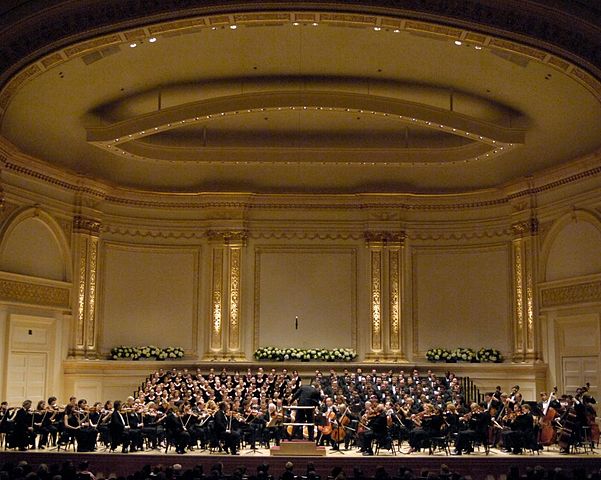 With many orchestras struggling financially, it’s encouraging to see successful efforts to broaden the appeal of the symphony in ways that would’ve been considered unthinkable years ago. Over this holiday season, when Tchaikovsky’s Nutcracker Suite is normally a staple, the San Francisco Symphony is featuring “A Charlie Brown Christmas” on Christmas Eve.  Popular movies like “The Lord of the Rings,” “The Godfather” and “Harry Potter and the Sorcerer’s Stone“ have all been well received by symphony audiences with “On the Waterfront” coming early in the new year.

Cash-strapped orchestras across North America are looking more to Hollywood for inspiration, pairing live music with feature films on gigantic screens.  Is it a tacky  gimmick or a legitimate and creative approach to attracting a new generation of audience members? Peter Rodgers, the marketing director for the symphony in Madison, Wisconsin, told the Cap Times that it’s all about creating music that is a part of people’s lives.  “Relevance is a big challenge for classical musicians and classical music in general. It’s relevant in so many different parts of our lives, but sometimes not as visible.”

The marriage of pop culture and classical music may be unpalatable to purists, but Rodgers says such collaborations are on the rise.  “Almost any big blockbuster film that has imagination and a lot of emotional content to it has classical music and many times original compositions,” he said.

Lee Kopp, a spokesperson for Symphony Silicon Valley, told the Mercury News  audiences have been wildly enthusiastic. “These movies in concert have been tremendous,” he said.  We’ve done ‘Fantasia,’ ‘Raiders of the Lost Ark,’ ‘Godfather,’ and the complete ‘Lord of the Rings’ trilogy,  all 1,200 pages of score,  nearly 10 hours of music, over 100 musicians and singers. I have never in a theater ever seen a 20-minute standing ovation for anything. People screamed until they could not speak.”

Former CEO and President of the Toronto Symphony Orchestra, Jeff Melanson, believes it’s important that communities feel they have a stake in cultural institutions like symphony orchestras. “All people need to feel they can play a part of the creative growth of the communities in which they live. In that respect, incorporating elements of popular culture in the classical music setting can help build stronger communities by bringing people together in a cultural setting,” Jeff Melanson noted.

During the time in which Melanson helmed the Toronto Symphony Orchestra, he helped remake the orchestra’s mandate to reflect the need for increased inclusivity.   “Communities that can successfully create a cultural sense of belonging become more vibrant and more alive for those who live in them. The symphony can play a key role in the creation of that collective sense of belonging.”

The creative changes in the music presentation are happening during a time when cost overruns, labor disputes and staffing challenges are putting symphonies at risk. “Cost disease is simple,” said Brett Egan, president of DeVos Institute of Arts Management. He told bizjournals “every year, the cost of doing business in our field increases, while our productivity remains more or less the same.”

The Philadelphia Orchestra, for instance, has come out of bankruptcy but the funding model, which is overly dependent on a small number of donors, remains challenged.  With just 2% of its donors providing 78% of its funding, the orchestra’s hold on solvency becomes tenuous if a key benefactor pulls out.   That’s just too much pressure to put on an organization. The stress filters down to all parts of the organization.

The economics of orchestras are being re-evaluated as financial strain puts pressure on philanthropists, management and musicians.  If part of that re-evaluation includes A Charlie Brown Christmas, then so be it.  So far, it appears to be part of the solution and orchestras and audiences are embracing it.

Filed under: Lifestyle, Music
Share Tweet Pin G Plus Email
previous article: How to Get the Girl or Guy of Your Dreams
next article: 5 Days training workshop on dispute resolution council concluded