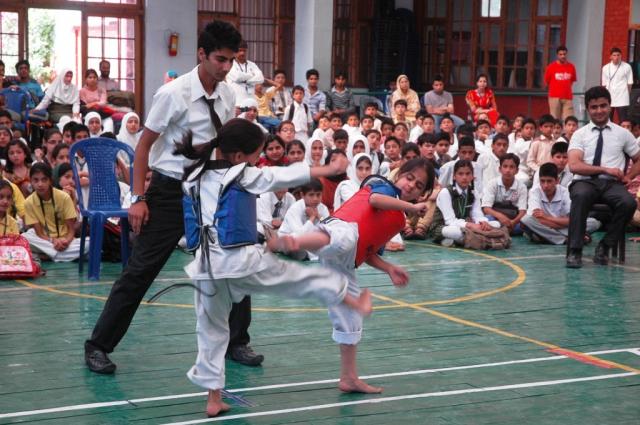 Srinagar, May 20 (Scoop News) –    “The Valley of Kashmir has bright history in the field of marshal sports as historical art documents are evidence to the fact that these games have been played in Kashmir where from the sport has spread to neighboring places gaining further popularity”, said Director Information Renzushah at a  function at DPS School where martial art final tournament and prize distribution function was held.

Renzushah, who was Chief Guest at the function, observed that with the revival of this game in valley a large number of youth are taking keen interest in these sports activities. He said the enthusiasm shown by youth in such activities indicates that is again attaining superiority in the game in sync with its past glorious record.

Speaking on the occasion, the Principal of DPS School assured to augment infrastructure to provide effective and advanced training to the students participating in the game, adding the keen interest of the students in the game necessitates development of befitting infrastructure. He said some students have proved their mettle at national level games also.

Sharma said huge treasure of sports talent available in the Valley needs well grooming and efficient patronage. He thanked Renzushah for his personal patronage of the game as well as those of scouting activities. He said his school will excel in Scouts field also.

The Chief Guest Renzushah accompanied by other dignitaries gave away gold, silver and bronze medals to first, second and third winners. He also distributed trophies to hundreds of other players, who proved their exceptional talent in martial art sports.

In sub junior boys up to 45 Kg Inyat, Suhail Manzoor and Rouf stood first second and third respectively;  in 45-48 Kg Mohsin, Sianjit Singh and Nayeem were declared as first second and third.  Sohail, Fasil Bashir and Ehtisham in 48-51 Kg category. Munir and Manzoor bagged first and second position in senior boys up to 54 Kg category, whereas Adhil Hussain and Sajid Hussain  also bagged first and second prize in 54- 58 Kg category.

A total number of 24 schools participated in the championship in  which 317 participants took part. district was declared as winner whereas Budgam district runner up.