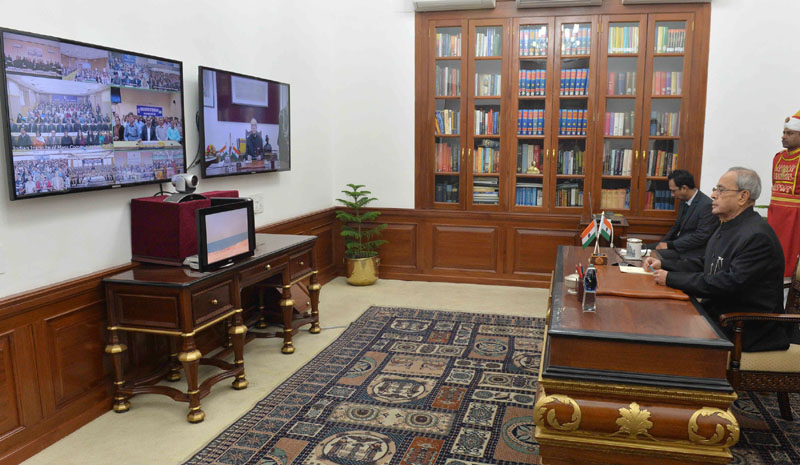 The President, Mr. Pranab Mukherjee addressing the Students and Faculty of the Institutes of Higher Learning and Probationary Officers at Civil Services Academies through video conferencing using National Knowledge Network (NKN), at Rashtrapati Bhavan, in New Delhi on January 19, 2016.

New Year Message On The Topic ‘Youth And Nation-Building’

New Delhi (PIB-GR-TYP-BIN): The President of India, Mr. Pranab Mukherjee delivered through Video Conferencing a New Year Message on the topic ‘Youth and Nation-Building’ to students and faculty of institutes of higher learning and civil service academies from Rashtrapati Bhavan on January 19.

Addressing the students and faculty, the President said we must inculcate in youths the spirit of democratic behaviour which calls for an appreciation of the rich diversity of our nation, assimilation of ideas, and accommodation of divergent or contrarian views. The idea of secularism is deeply ingrained in the consciousness of our nation. It has to be further strengthened in the minds of the young ones to build a harmonious society. Gender equality is essential for building an inclusive society. Unless women participate on equal terms and in equal numbers in the process of nation-building, all efforts will remain incomplete. A spirit of reverence towards women must be instilled in our children in our homes and educational institutions. It must guide social conduct of an individual from an early age.

The President said the Government has launched programmes for financial inclusion, creation of model villages and formation of a digitally-empowered society. What we have to do now is to create enough opportunities through their implementation to meet the ambitions of an aspirational India. The nation which the youth have to build as bureaucrats, technocrats, scientists, educators, social innovators, thinkers, and agriculturists has to be an India which will ensure a decent and fulfilling life to all its citizens. It has to be a swachh India, swasth India, a digitally-empowered India, educated and skilled India, and a tolerant, harmonious and peaceful India where the last person feels a part of the narrative of the country.

The President said for building the India of our dreams, we all have to work together to develop an eco-system which will bring together innovators, entrepreneurs and financiers, which will recognize merit and give primacy to science, technology and innovation. A facilitative and supportive environment for free play of all creative forces, be it in government, corporate sector or academia, has to be created. The higher academic institutions have a clear role to play in refining the entrepreneurial abilities of their students. Teaching of entrepreneurial studies as a course in our institutes will be a good beginning.

The President called upon all educational and civil services institutions to inculcate in their students and trainees a sense of social responsibility. He suggested some steps for enhancing their engagement with the community such as assigning them to teach in nearby government schools for at least one hour per month; deploying them to undertake community-based projects to uplift the condition of people in the vicinity and assigning them to identify problems faced by villages and work on innovative solutions which blend modern technology with local practices.