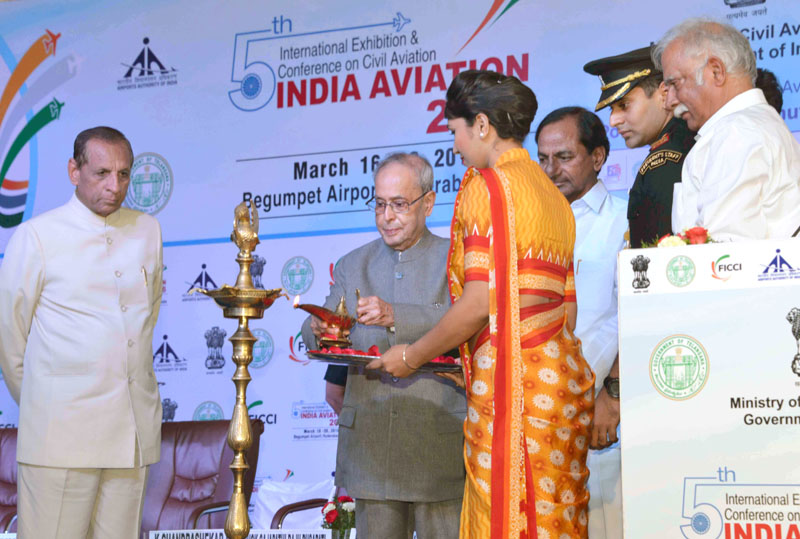 Hyderabad (PIB-GR-TYP-BIN): The President of India, Mr. Pranab Mukherjee inaugurated the 5thEdition of ‘India Aviation’ in Hyderabad on March 16.

Speaking on the occasion, the President said India is at the threshold of taking a major leap in the aviation sector. ‘India Aviation’ 2016 is well timed and resonates well with our latest policy initiatives of ‘Make in India’, ‘Stand up India’ and ‘Start Up India’. It is for global giants to seize this opportunity and take the lead to forge long-term partnerships. He expressed hope that this platform will usher a new era in strategic partnerships and collaboration in the Indian civil aviation sector enabling India become a hub of world class aerospace technology and services.

The President said Indian civil aviation market is growing at a rapid pace and now ranks ninth in the world. It is estimated that by 2020, India would be the third largest civil aviation market. With a network of domestic and international airlines connecting 40 countries, Indian airports handled passenger traffic of 190 million persons in 2015. Yet India is one of the least penetrated air-markets in the world with 0.04 trips per capita per annum as compared to 0.3 of China and more than 2 in the USA. The development of tourism, trade and travel has contributed to increased passenger traffic in India. By 2020, total passenger traffic in India is likely to touch 421 million. It is time for the government and all stakeholders of the Civil Aviation Industry to leverage this tremendous business opportunity.

The President said the civil aviation sector of India is poised for a faster and sustainable growth with the development of 100 smart cities; new economic corridors; more than 50 new airports and expansion of existing airports. The government is planning to invest over 120 Billion US$ in the development of airport infrastructure and Aviation Navigation Services over the next decade. The deeper air penetration to smaller cities; better connectivity to North Eastern part of India and higher disposable incomes of the middle class of India is expected to further propel the growth of Indian Civil Aviation Industry.