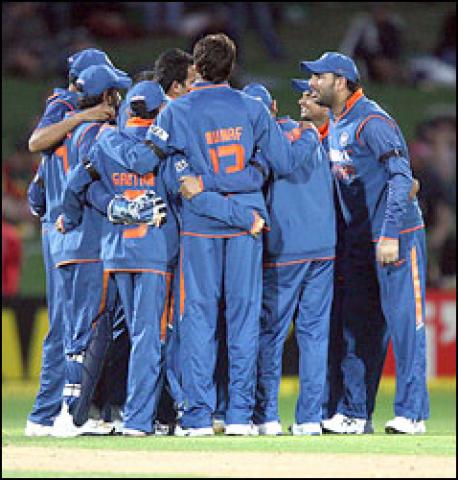 Mahendra Singh Dhoni hit an unbeaten 84 and Virender Sehwag smashed an aggressive 77 to lead India to a 53-run victory over New Zealand in the rain-shortened first limited-overs cricket international Tuesday.

India made 273-4 in an innings shortened by rain from 50 to 38 overs, and New Zealand reached 162-9 in reply as its run chase was twice revised under the Duckworth-Lewis system.

The target was first raised to 278 from 38 overs, then revised to 216 off 28 overs after a further rain delay.

New Zealand was 111-4 four after 20.5 overs when showers forced the second recalculation and it returned to field when rain passed needing 105 runs from 7.5 overs to win.

Harbhajan Singh ended any chance of a New Zealand fight back by taking three wickets with four balls in the 24th over as New Zealand slumped from 132-5 to 132-9. Singh finished with figures of 3-28 and New Zealand’s innings crumbled as five partnerships failed to produce a run.

Martin Guptill top-scored for New Zealand with 64 from 70 balls, Ross Taylor made 31 from 24 and captain Daniel Vettori ended 26 not out, while four New Zealanders failed to score.

"It’s disappointing but I think right from the start India outplayed us and we just didn’t get it right with the ball," Vettori said.

"Some quality players stepped up for them tonight and they made it very difficult for the bowlers," he said. "We weren’t able to bowl in our zones, we were sloppy in the field and it was India’s day all-round."

Sehwag hit 11 fours and a six to spur India to a competitive total. The Indian added 69-runs from 9.4 overs in a first-wicket partnership with Sachin Tendulkar, who was out for 20 when he feathered a catch from Ian Butler to wicketkeeper Brendon McCullum.

Sewag’s 34th limited-overs half century came off 37 balls as he saw India to 100 in 14 overs, joining in a 50-run partnership for the second wicket with captain Dhoni, who elected to bat first after winning the toss.

"I think the start is important for us," Dhoni said. "If we get a decent start we’ve got the firepower to capitalize."

Sehwag had the New Zealand bowlers at his mercy when, in the 19th over and with India on 128, he drove uppishly through cover and was brilliantly caught by Ross Taylor, diving full length, off a Daniel Vettori ball.

Dhoni took charge of the innings and kept the run-rate ticking over, including 29 singles in a 66-ball half century.