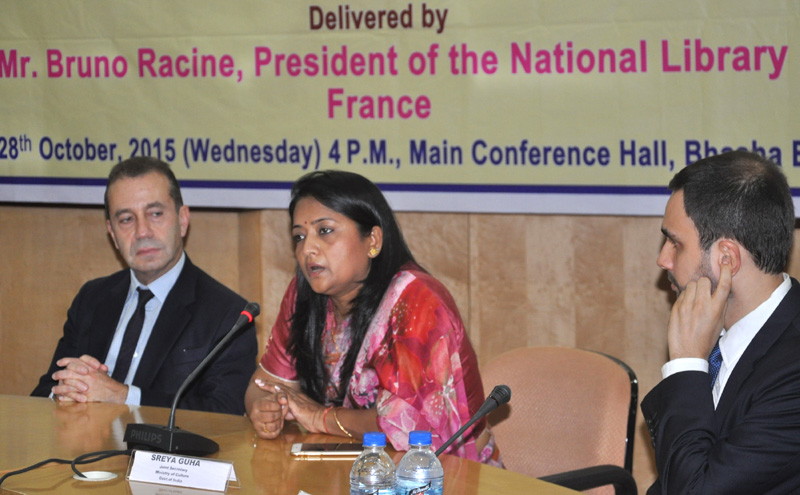 The Joint Secretary (Library), Ministry of Culture, Ms. Sreya Guha addressing after signing documents of an MoU on Digital Preservation and Conservation of Written Heritage at National Library, Kolkata on October 28, 2015. The President of National Library of France, Mr. Bruno Racine is also seen.

Kolkata (PIB-GR-TYP-BIN): Indian and France signed a Memorandum of Understanding (MoU) to conserve, develop and publicize written heritage, at the National Library in Kolkata on October 28. Ms. Sreya Guha, Joint Secretary (Library) in the Ministry of Culture and Mr. Bruno Racine, President of the National Library of France signed the MoU on behalf of their respective countries. This will entail development of digital co-operation, sharing of technical and other expertise, competency and skill-building and cultural co-operation between the two countries.

The MoU will assist a programme on digitization of old manuscripts and documents, begun in France seven years ago, as it will make it possible for gaining their experience and high –quality expertise in this field. Ms. Guha said that the Ministry of Culture is emphasizing on the project of building a National Virtual Library in India which will store and share numerous manuscripts, archives, artworks etc., and this co-operation will go a long way in efficient implementation of this project.

The National Virtual Library will link and share all knowledge resources lying within the possession of various government institutes and other organizations of both the countries. France is also keen to avail India’s assistance in sorting out, deciphering and gaining a better insight into their collection of the several thousands of Indian documents, especially in Sanskrit and Tamil languages,that are archived in their possession, she said.

Mr. Racine said a number of correspondences between Rabindranath Tagore and French scholar Sylvan Levin lying with them. All these can be made a part of the digital collection, he said. Mr. Racine disclosed that a number of joint Indo-French symposia and conferences in connection with this are lined up.

The Director General of National Library, Dr. Arun Kumar Chakraborty and the new Consul-General of France in Kolkata, who were also present on the occasion, said that capacity and skill building programmes under the agreement will give a boost to Make In India and Skill India programmes.