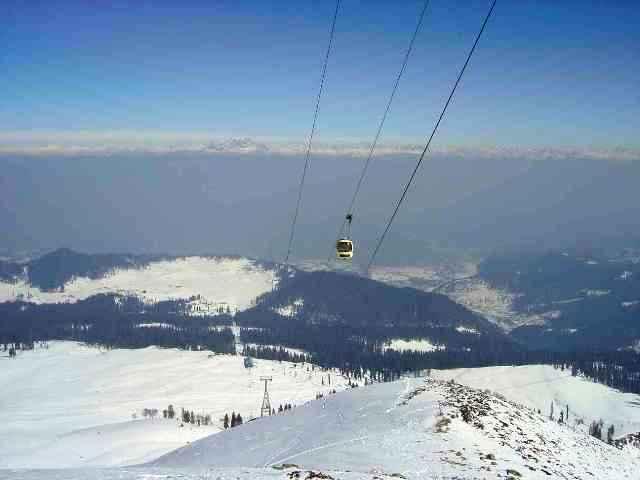 Srinagar, June 29  – Minister for Tourism and Culture, Nawang Rigzin Jora, has said that Gulmarg Asia’s premier tourist resort, is the treasure-trove for a traveler. He said the upgrade of the tourist related infrastructure at par with international standards to tap fully its tourism potential for achieving the target of attracting more overseas visitors at this destination, are afoot.

Mr. Jora said this during a day-long extensive tour of Gulmarg today while taking stock of various ongoing developmental projects and to assess on spot further development requirements of the tourist destination.

The Minister said that Gulmarg has become worlds’ highest lift served ski resort providing a downhill ski run of over 5 kms from a hight of 14000ft in Apharwat range. He said to explore fully the potential of this premier hill resort a chair lift from Kongdoori-Marrishoulder of Apharwat would be constructed at an estimated cost of Rs. 9 crore adding that construction would be started in July this year.

The Minister during a Gondola ride to Kangdoori and Apharwat assessed the required development of infrastructure. He said state’s highest altitude cafeteria, a Iglo type hut would be constructed at Apharwat. He said in order to protect the environment of Gulmarg- Kungdoori corridor aforestation work would be also taken up at a cost of Rs. 1 crore and old chairlift would be made functional for visiting tourists to the area.

Giving details about infrastructure expansion programme in the area, the Minister said creation of more infrastructure is needed at Gulmarg and its surrounding tourist resorts. He said 20 rooms budgeted accommodation at a cost of Rs. 4 crore would be constructed besides, the conversion of old Maharaj’s palace into a Convention Centre would be also taken up at a cost of Rs. 2 crore adding that underground cabling of electric net work and improvement of water supply is also on anvil in the area.

While taking stock of the functioning of Gondola Cable Car project, the Minister was apprised that the Corporation has earned a revenue of Rs. 5.10 crore from April to June this year. He was informed that about 2 lakh domestic and foreign tourists visited Gulmarg so far this year.

The Minister inspected various under execution and newly completed projects and was briefed that the works amounting over Rs. 7 crore including construction and renovation of huts, cafeterias, way side amenities, development of Parks, lakes and upgradation of Ice skating, ice hockey rink have been completed.

Mr. Jora also inspected the pace of upgradation work of golf course Gulmarg, which is being upgraded to 18 holes involving a cost of Rs. 4.50 crore. He was informed that this worlds’ highest golf course would be ready for Tee of by September this year. He also inspected ski hire shop and was informed that good quality equipments worth Rs. 5 crore are available on hire besides services of trained instructors are at hand for guiding amateur skiers.

During the inspection, the Minister issued instructions for landscaping and face lifting of various spots. He also instructed for taking measures for construction of commercial hotels especially at Dhobhi Ghat tourist resort besides replacing of old furnishing in Apharwat cafeteria.

Seeking the appraisal about the development of Botapathri tourist resort, the Minister was apprised that 5 camping sites at a cost of Rs. 5 crore are being developed in the area.

He emphasized involvement of local people in tourism related activities so that they become equal partners in the venture besides will benefit the states’ economy. He also impressed upon the concerned authorities to ensure timely completion of upgraded works so that top-notch facilities are extended to the tourists.