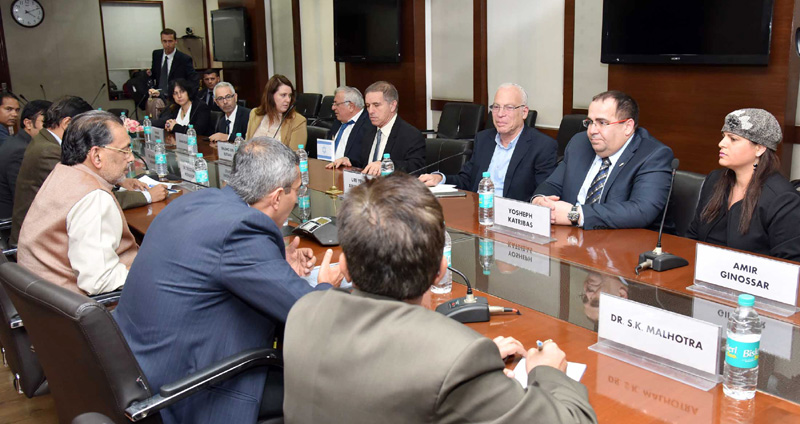 The Union Minister for Agriculture and Farmers Welfare, Mr. Radha Mohan Singh in a meeting with the Minister of Agriculture & Rural Development of Israel, Mr. Uri Yehuda Ariel Hacohen, in New Delhi on January 11, 2017.

Both Sides Express Satisfaction Over The Progress

New Delhi (PIB-GR-TYP-BIN): Union Agriculture and Farmers Welfare Minister, Mr. Radha Mohan Singh met Israeli delegation on Jan 11, led by the Agriculture and Rural Development Minister of Israel, Mr. Uri Ariel to discuss issues relating to bilateral cooperation in agriculture between India and Israel. Both sides expressed satisfaction over the progress made in cooperation in the agriculture and allied sectors between the two countries.

Both sides expressed their commitment to further strengthen bilateral relations in the field of Agriculture which is manifested by the fact that the third phase of Action Plan for 2015-18 in the field of Horticulture has recently been finalized by the two countries. Under this program, as many as 27 Centres of Excellence (CoEs) in the cultivation of various fruits and vegetables, in 21 states, are being set up, out of which 15 CoEs are complete.