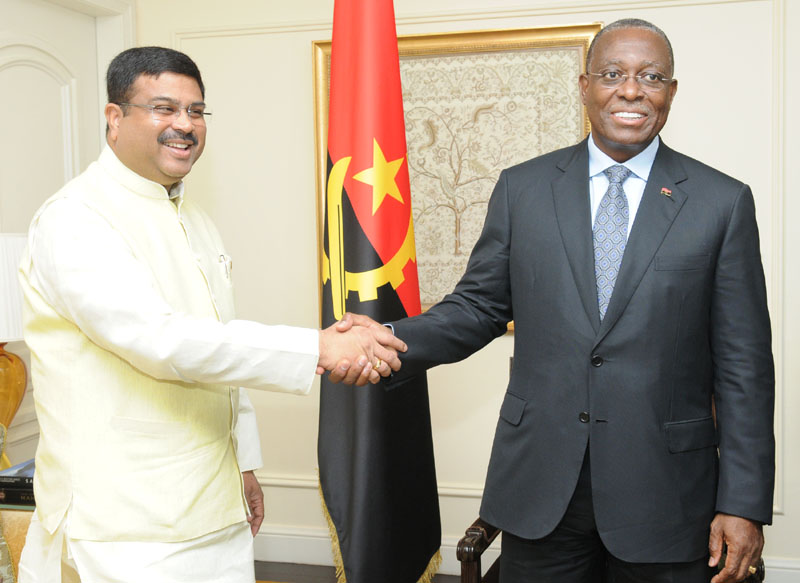 The Minister of State for Petroleum and Natural Gas (Independent Charge), Mr. Dharmendra Pradhan in a bilateral meeting with the Vice President of the Republic of Angola, Eng. Manuel Domingos Vicente, in New Delhi on October 30, 2015.

Mr. Pradhan accompanied by Secretary and senior officials of MoPNG and CMDs of IOC,OIL, EIL and MD OVL, conveyed to the leadership of the African countries that India is keen to intensify its hydrocarbon cooperation with the African countries on upstream, midstream and downstream areas. He stressed the potential to graduate to an energy partnership between India and the African nations.

Mr. Pradhan also accompanied Prime Minister Modi in his bilateral meetings with Presidents of Nigeria, Sudan,South Sudan, Gabon, Prime Minister of Mozambique and Vice Presidents of Tanzania and Angola. Cooperation in Oil and Gas sector was one of the key areas discussed during these meetings. It was also decided that the 4th India-Africa Hydrocarbon Conference will be held in New Delhi on. 21-22 January 2016 in New Delhi.

It may be noted that India imports about 33 MMT crude oil from Africa, which constitutes 18 per cent of our total crude import. Indian Public Sector oil and gas companies have invested about US$ 8 billion in oil and gas assets in Mozambique, Sudan and South Sudan. EIL has been associated with refining sector in several countries as well. During the Urga Sangam on March 27, 2015 Prime Minister has asked for increasing India’s focus on Africa for the energy security of India.