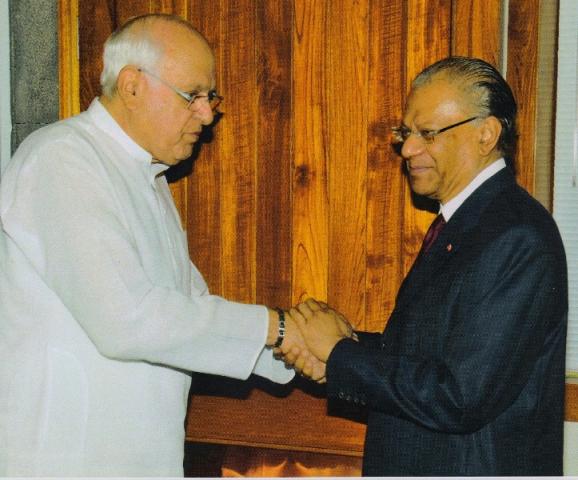 New Delhi/Jammu, January 24 (Scoop News) –    has offered help to in developing its renewable energy sector. The Minister of New and Renewable Energy, Dr. Farooq Abdullah, during his recent visit to Mauritius called on the Prime Minister of Mauritius, Dr. Navinchandra Ramgoolam, and had bilateral meetings with Deputy Prime Minister and Minister of Energy, Dr. Ahmed Rashid Beebeejaun, and other Ministers of Mauritius. Dr. Abdullah offered assistance to the island nation in tapping its renewable energy resources including wind, solar and geo-thermal. Dr. Abdullah also offered to scale up Indian initiatives in capacity building and support in design and policy framework for renewable energy initiative in that country. He made a special reference to the traditional and warm ties between the two countries and of the multi-cultural and diverse society that had been created as a result of emigration of hundreds of thousands of Indians to . The Mauritian side thanked for its support in imparting training to Mauritian scientists and technicians in solar and wind energy.

Dr. Abdullah also visited at where he laid a wreath on the Samadhi of the Father of the Nation and first Prime Minister of , Shri Seewoosagur Ramgoolam.  He also visited the Apravassi Ghat.  The Ghat, now a UNESCO world heritage site, was the first point of landing for the indentured labourers who left to work in .  The Minister also attended a municipal reception at the Council Hall with socio-cultural organizations.