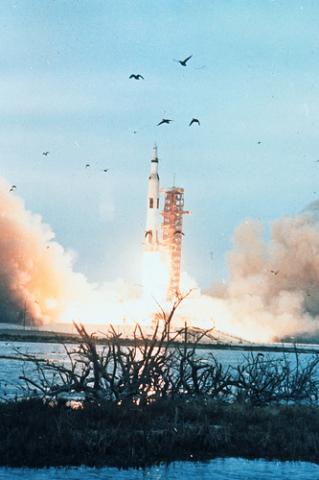 After a fifty hour countdown, the Polar Satellite Launch Vehicle (PSLV-C 9), surged into space from the world class second launch pad on Monday, from the Satish Dawan Space Research Centre at Sriharikotta.The satellite put as many as 10 satellites into orbit. As each satellite winged out of the vehicle, it had to be re-oriented to prevent collision. The feat proved the versatality, reliability and flexibility of the PSLV. This was the 13 th PSLV flight and the 12th successful one in a row.

The challenge of this mission was that the fourth stage of the rocket should fire the ten satellites in to the orbit, one after another, in a timed sequence without any collision, said Indian Space Research Organisation Officials.

Two satellites belong to ISRO and other eight, called nano satellites, are from different countries. These are very small satellites and all of them together weigh only 50Kg.

Although the PSLV successfully launched multiple satellites three times earlier, three satellites each on  May 26 1999, October 22 2001 and four satellites on January 10 2007, this is the first time that ISRO is attempting to put into orbit as many as 10 satellites using a single rocket.

‘It is a good experience to launch so many satellites, because it was quite an involved and complex task,’ said R.N.Suresh, former Director of Vikram Sarabai Space Centre, Thiruvananthapuram. The VSSC has built the PSLV-C9 which is a four stage vehicle.

It is the ‘core alone’ version of the PSLV that will put the satellites in orbit. The core alone is a lighter vehicle weighing 230 tonnes instead of the standard configuration which weighs 295 tonnes.

The two Indian Satellites being carried are Cartosat- 2Aand Indian Mini Satellite (IMS-1). The Cartosat-2A, weighing 690 Kg is a remote sensing satellite and its images will have a resolution of one metre. The images  will be used in making maps which will provide valuable information in planning urban infrastructure, rural roads, ring roads and settlements.

The IMS-1,weighing 83 Kg is also a remote sensing satellite and with the images sent down by its two cameras can be used to monitor features on the  earth such as its vegetation and water bodies. The ISRO, Bangalore has built the two satellites.

Six of the eight nano satellites are clustered together and are named NLS-4. The University of Toranto, Canada  has developed the NLS-4. It comprises Cute 1.7 and SEEDS, both built in Japan, while the remaining four CAN-X2,AAUSAT-II, COMPASS 1 and DELPHI-C3, were built in Canada, Denmark, Germany and the Netherlands respectively.

The two other nano satellites,NLS-5 and Rubin-8, belong to the University of Toranto and Germany. Building these nano satellites amounted to a good experimentation for several universities said Dr. Suresh.

According to ISRO officials it would be a demanding mission because the fourth stage of the PSLV-C9 would have to be reoriented each time it ejected a satellite into orbit.