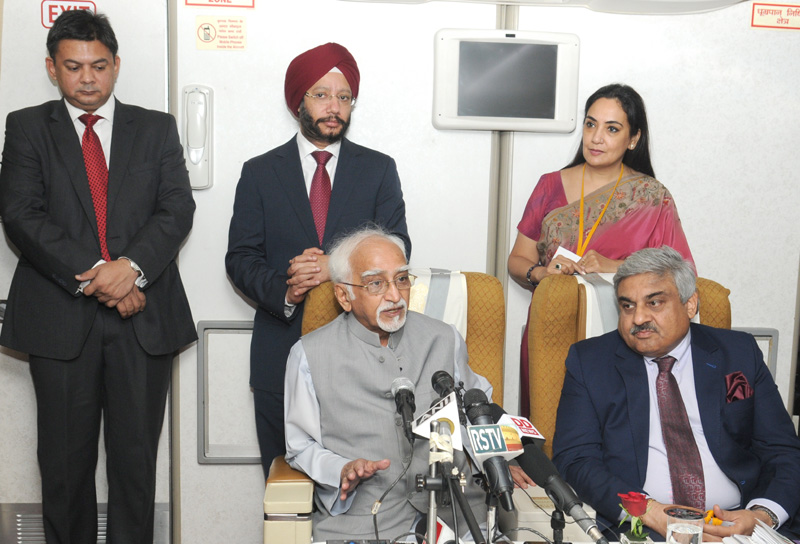 Leaves For Indonesia And Brunei On A 5-Day Official Visit

New Delhi (PIB-GR-TYP-BIN): The Vice President Mr. Mohd. Hamid Ansari said that India enjoys close and cordial relations with both Indonesia and Brunei, and would seek to renew its friendship during the ongoing visit. He was addressing a Press Conference onboard the special flight enroute to Indonesia and Brunei on a 5-day official visit, on November 1.

The Vice President emphasized, that as a maritime neighbor and a strategic partner, with a number of cultural similarities, including its own multicultural and multi-linguistic character, India has traditionally enjoyed close relations with Indonesia. On the economic side, he said that there exists about 20 bn dollar trade between these two nations and India’s investments in Indonesia have also been increasing. India is also an important buyer of Indonesian palm oil and coal. ‘This is a relationship that our successive leaderships have cultivated over the years’, he added.

On India’s relationship with Brunei, the Vice President said that the Kingdom has been very friendly to India, and we have been maintaining cordial relations with the country. On the economic side, he said that India imports almost one billion dollar worth of crude oil, and that there was a large Indian community in Brunei which was making its contribution in the field of medicine, education and business.