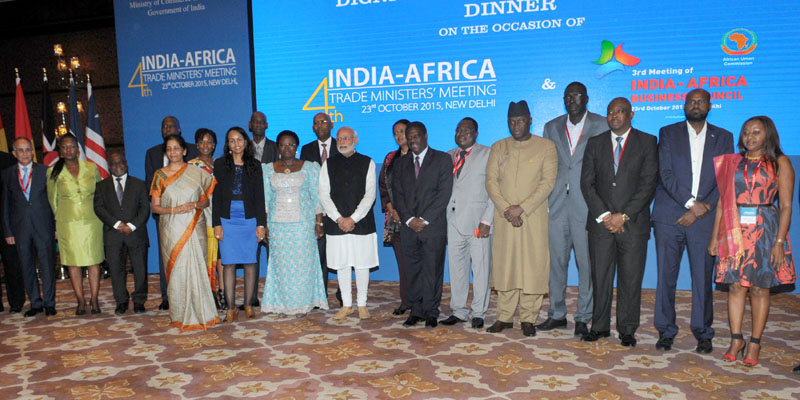 The Prime Minister, Mr. Narendra Modi in a group photograph with the Trade Ministers from Africa at an informal session, in New Delhi on October 23, 2015.

New Delhi (PIB-GR-TYP-BIN): Minister for Commerce & Industry, Mrs. Nirmala Sitharaman has said that India sees Africa as a natural partner and together, we can have a positive influence on the future global economic order. Speaking at the 4th India-Africa Trade Ministers’ Meeting in New Delhi on October 23, she said that both India and Africa face similar challenges and concerns and the world economy offers tremendous opportunities to the two Fastest Growing Regions.

Addressing the Trade Ministers, Mrs. Sitharaman said that consequent to the First India-Africa Forum Summit in Delhi in 2008, India made an announcement of granting Duty Free Tariff Preference to Least Developed Countries (LDCs) in order to open the Indian market to greater exports from African countries. Since April 2014, the scheme has been further expanded and as of now India provides duty free market access on about 96 per cent of India’s tariff lines and another 2.2 per cent tariff lines to LDCs thus providing benefits on 98.2 per cent of all tariff lines. In addition, India has been one of the first countries to provide a services package for LDCs and has also waived visa fees for businessmen from LDC countries travelling to India.

Highlighting the importance of India-Africa Summit, Mrs. Nirmala Sitharaman said, “the Summits have become a unique platform where the Government of India and African partners identify areas of cooperation through dialogue and strive to expanding and enhancing the partnership. Cooperation in Trade, Technology and Capacity Building form the basis of our relationship. Greater cooperation in agriculture and agro-processing, engineering, textiles, leather, pharmaceuticals to name a few would have a positive bearing on the food security, improvement in health situation and creation of additional jobs in both Africa and India.”

She highlighted that value addition is the key to development and enhancing livelihood opportunities for people. India has made significant progress transforming itself from being an importer to a net exporter in many sectors since independence. India would endeavour to share its experience and expertise in partnering with African countries which have potential for value addition, creating jobs, enhancing livelihood and ultimately attaining a better quality of life.

The 4th IATMM saw deliberations on Review of progress in the implementation of commitments of earlier India Africa Trade Ministers’ Meetings and Review of Existing Trade and business relations between India and Africa. The two sides also had discussions on Duty Free Tariff Preference (DFTP) Scheme and Services Waiver for LDCs and Cotton Technical Assistance Programme (TAP). The Round Table on WTO issues was also held during the meeting. A meeting of the India Africa Business Forum was a highlight of the event.

Filed under: News, World
Share Tweet Pin G Plus Email
previous article: ‘Rulers That Condemn The Wicked Are The Delight Of Citizens And Nations’
next article: Revive inter-religious debates and dialogues to lay the foundations of harmony and brotherhood: Governor