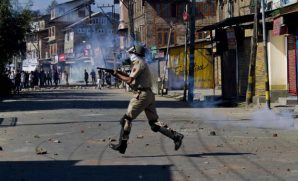 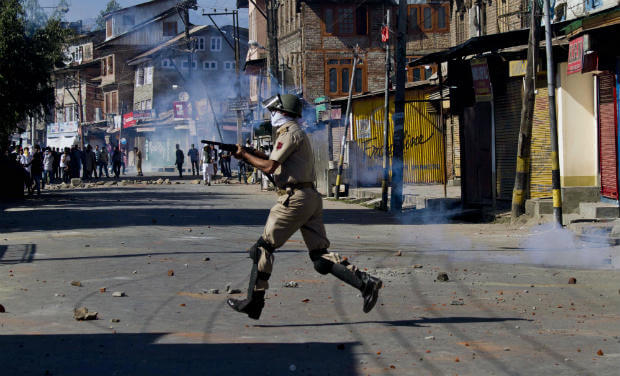 The state of Jammu and Kashmir is on boil, the Nero’s of Delhi durbar are playing ‘Vade Matram’ orchestra, and in that cacophony making the noise of regional and linguistic exclusiveness sound a whimper.

The current rulers of Hindustan have unleashed a region of terror using pellet guns over unarmed people and feel happy that they have found solution to tame such human resistance.

They may be in for a surprise if the same situation erupts up in as many as 14 other locations in the country, all waiting to have a distinct entity of its own.

If that happens, will the Nero’s of Hindustan continue to play ‘Vade Matram’ orchestra to defuse any such crisis or give it a realistic thought address such genuine aspiration of the people?

The answer is difficult because a policy paralysis has gripped the current dispensation and its arrogance and ignorance is apparent in dealing with the situation of carnage and rebellion in Jammu and Kashmir. The Indian government’s hard-line approach has so far taken 68 human lives.

The tinder box is simmering below the surface in as many as 14 locations of the country; four in UP, three in Assam, two in Bihar, one each in Gujarat, Maharashtra, West Bengal, Andhra Pradesh, and Karnataka. All of them are carving for separate identity and human resistance is waiting to be ignited.

In India, since 1956, the reorganization of states has been happening from time to time, but the sore point is, efforts in this direction is made when there is a huge people’s movement built and many  have to give blood to the cause.

We have seen this with regard to the creation of Jharkhand, Uttrakhand and Chatisgarh states. All of them came into existence after long drawn out human protests. The people’s movement in these states are littered with blood and only after a long struggle the government of the day has succumb to their demand.

The same can be said about Telngana, where people’s movement goes back to 1970 and even earlier, but the statehood was possible only in 2014, when the government finally relented to the people’s demand.

The fundamental point here is why the successive governments are peeve over the creation of the new states which could be based on the geographical, linguistic or cultural entities?

Why the government is stifling the natural growth of a particular region and acting shy to its developmental goal?

There are no logical answers to it and it’s beyond comprehension for ordinary mortals to gauge the Nero’s mind.

We all know the orchestra of ‘Vande Matram’ was the swan song during the freedom struggle; it served its purpose well, and got us independence. However, after 69 years of independence, the relevance of this brand of nationalism is now being questioned. How long the demand of sub nationalism under larger umbrella of nationalism can be bottled up?    India has become much stronger over the years and this does not mean that this issue can be wished away by appealing to nationalism and maintaining peace under the shadow of the gun.

The people’s movement in Jammu and Kashmir is showing the searchlight pricking many minds and it could be the proverbial lull before the storm.

India’s is an administrative maze and no one had comprehended it better than the colonial rulers of Hindustan. When they established the contours of Indian administrative set up, linking localities with blocks, blocks with subdivisions and subdivision with districts and districts with a province, they established the modern edifice of governance in India.

Given the colonial nature, the British rulers were keen to have an administrative setup in place for governance and had no interest in the developmental demand of any geographical region, linguistic or cultural entities.

Thus British efforts to reorganize the Indian states on governance plank though kindled the nationalistic aspirations among the people but in the process subsumed sub nationalistic sentiments that has long been nourished from time immemorial. The colonial created imbalances continued to drift as so, even 70 years after independence.

The states like Uttar Pardesh (Northern Province) and Madhya Pradesh (Central Province) are colonial legacies. These states do not have any rational basis, if we apply the yardsticks of regional, linguistic and cultural entities as the basis of formation of states. Even though there is huge necessity to reorganize them to address their developmental goals, they are allowed to continue as so in the independent India.

In fact, in the last general assembly election of UP, Ms Mayawati, the BSP chief had suggested creating at least four states from this linguistically, culturally and geographical diverse landmass of Uttar Pradesh. However, her words of wisdom were seen as a cry of someone who has lost the election.

In the eastern state of Assam, as many as three people’s movement is simmering. The first is Karbi Anglong, second is Kamatapur state, and third the Bodoland state.

The Karbis living in the central part of Assam in the autonomous districts of Karbi Anglong and Dima Hasao that are put in the sixth schedule are demanding a separate state.

Similarly, the Koch Rajbhongshis demand for Kamatapur state. Here, protest is for granting Cooch Behar the status as Kamatapur state is heard quite often.

It may be recalled that in 1949, Cooch Behar merged with India as C category state. In 1956, all the C category regions got Union Territory status and some even got statehood later, but Cooch Behar’s regional identity was extinguished and some of it’s district was given autonomous status within Assam.

The demand for the Bodoland state is heard through violent noises for a long time now.  The Bodos want their present sixth schedule territorial autonomous council area in Kokrajha region that covers four districts of Assam to be made a separate Bodoland state. The consistent denial of their demand is fuelling armed rebellion there, which controlled by the counter insurgency methods.

In Andhra Pradesh, after the creation Telangana, there seems to be a quite atmosphere, but the demand for the creation of Rayalaseema state is very much on the cards. The distinct regional identity here wants to be nurtured from Tirupati and not from Amravati.

Similarly, in Gujarat, the demand to create the Saurashtra state is pending for long, so is the demand for Vidarbha state in Maharashtra.

In Karnataka, the demand for Kodagu state is simmering for long and so is the cry for the Gorkhaland state in the northern regions of West Bengal. The creation of Kosal state in Odisa is too hidden below the surface, waiting to be ignited.

Bihar is another case of linguistic and geographical incongruity. Here the demand for the creation of the Mithlancal state based on common Maithli language is long overdue.

Similarly, the Bhojpuri language and common culture that forms a vast tract of linguistic and geographical landmass between UP and Bihar, too nurses the aspiration for the creation of a Bohjpur state.

In sum, the reorganization and reconstruction of the distinctive regional identities poses a huge challenge to the country. The successive governments have tried to keep a lid on them harping to maintain a national identity. It is time debate whether such policy is doing more harm than good to the national cause.

If right steps are taken by the government in such direction and bottled aspirations are carefully opened, it can pre-empt the situation that we now witness in the state of Jammu and Kashmir.

Syed Ali Mujtaba is a journalist based in Chennai. He can be contacted at syedalimujtaba@yahoo.com