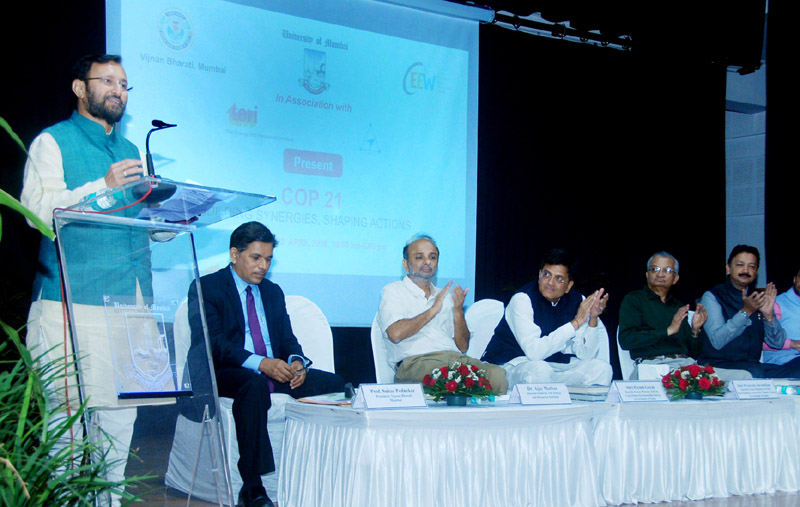 The Minister of State for Environment, Forest and Climate Change (Independent Charge), Mr. Prakash Javadekar addressing at the seminar on ‘COP 21- Building Synergies, Shaping Action’ in Mumbai on April 02, 2016. The Minister of State (Independent Charge) for Power, Coal and New and Renewable Energy, Mr. Piyush Goyal and other dignitaries are also seen.

Our Thrust Is On Adopting Clean Coal Technologies: Piyush Goyal

Mumbai (PIB-GR-TYP-BIN): Reasserting India’s commitment to carbon emission reduction and sustainable development, Union Environment, Forests & Climate Change Minister Mr. Prakash Javadekar said India, along with 100 other nations would ratify the COP 21 Global Climate Agreement on April 22. COP 21 would be ratified at a high level signing ceremony to be convened at the UN Headquarters in New York. The agreement, negotiated in Paris in December 2015, sets out a global action plan to put the world on track by limiting global warming below 2 degree Celsius.

Speaking at a Symposium “COP 21 – Building Synergies, Shaping Actions” organized in the University of Mumbai on April 3, Mr Prakash Javadekar said “all countries have decided to walk the green path as per their common but differentiated responsibilities”. He described the Paris agreement as a victory of multilateralism and the one which helped correct image perception of India. “India was always perceived to be a naysayer and negative in its approach and took a corner seat in most of the international conferences. But in Paris, Prime Minister Narendra Modi introduced the concept of climate justice driving home the message of sustainable development”

Union Minister of State (IC) for Coal, Power, New & Renewable Energy, Mr Piyush Goyal said his portfolios put him in an awkward situation. “I am a polluter as well as a pollution container”, he said.

Mr. Goyal said India has launched the world’s largest renewable energy programme by scaling up the target for solar energy “The solar energy mission envisaged 20,000 Mw of solar electricity generation by 2022. But this target has been pushed ahead by the Prime Minister to 1,00,000 Mw (1Gw)”.

Mr. Goyal said his Ministry has already bid out 19,000 Mw of solar energy projects and the installed capacity of 20,000 Mw would be achieved as early as 2017.

Mr. Goyal said coal, which is available in abundance in India, has its own place in ensuring cheaper energy. “While one is aware of pollution caused by the thermal power plants, their importance cannot be overlooked. Therefore, our thrust is on adopting clean coal technologies” he added.