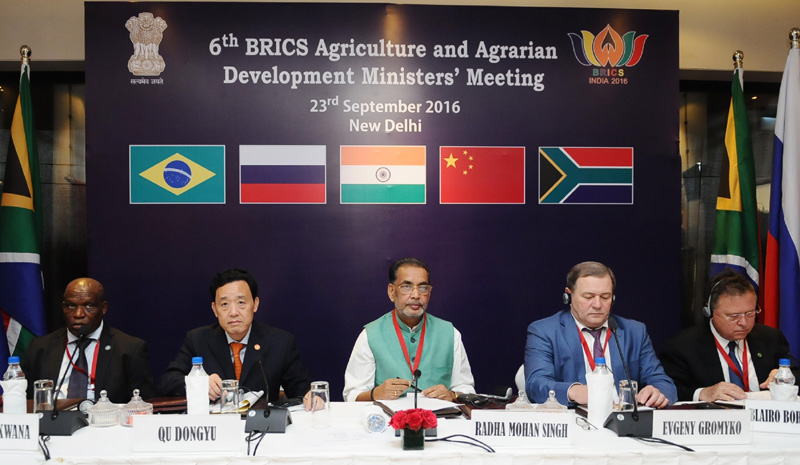 The Union Minister for Agriculture and Farmers Welfare, Mr. Radha Mohan Singh at the inauguration of the 6th BRICS Agriculture and Agrarian Development Ministers’ Meeting, in New Delhi on September 23, 2016.

New Delhi (PIB-GR-TYP-BIN): The BRICS Agriculture Ministers meeting in New Delhi, has agreed to set up a platform for developing and sharing models for sustainable agriculture. The platform which will be a virtual facility aims to promote food security, sustainable agricultural development and poverty alleviation through cooperation amongst the members. The meeting held under India’s Chairmanship for the first time and presided over by the Minister for Agriculture and Farmers’ Welfare, Mr. Radha Mohan Singh also resolved to promote climate resilient agriculture technologies and improve capacity for exchange of information.

In a joint statement issued at the end of the two -day meeting of the BRICS Agriculture and Agrarian Development Ministers on Sep 23, the participating countries agreed to declare year 2016 as the International Year of Pulses in line with the declaration made by the UN General Assembly. The BRICS meeting was attended by the Agriculture Ministers from Brazil, Russia, India, China and South Africa.

Earlier addressing the BRICS summit in the morning, the Agriculture and Farmers’ Welfare Minister, Mr. Radha Mohan Singh spoke about India’s effort in reducing the input costs of farmers through Soil Health card Scheme and the PM Krishi Sinchai Yojna (micro-irrigation). Besides soil health card and micro irrigation, the Minister also underlined the importance given to organic farming by the NDA Government.

The Minister said in order to take on the adverse effects of climate change, India has embarked upon a slew of initiatives by undertaking a National Action Plan on Climate Change. Another initiative in this direction is National Mission for Sustainable Agriculture to transform Indian Agriculture into a Climate Resilient Production System through suitable adaptation and mitigation measures such as promoting location specific integrated/composite farming systems, soil and moisture conservation measures, comprehensive soil health management, efficient water management practices and main streaming rain fed technologies.