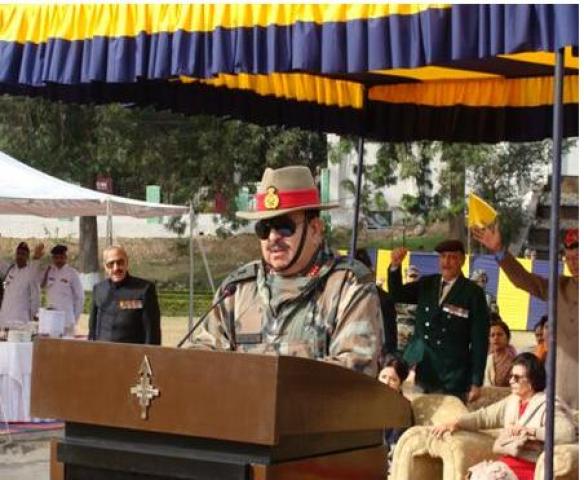 Leh/Jammu/Srinagar, December 16 (Vijay Kumar) – Vijay Diwas was celebrated in Leh, , and Udhampur & Srinagar on Wedenesday by Indian Army.
Indian Army celebrates 16 December each year as Vijay Diwas. On December 16, 1971, the Indian Army, Navy and the Air Force together achieved a historic victory over Pakistani Forces. .  On this day Lieutenant General Jagjit Singh Aurora, General Officer Commanding –in – Chief Eastern Command of the Indian Army accepted the surrender of 91,000 strong Pakistan Army alongwith its Commander-in-Chief of East Pakistan Lieutenant General AAK Niazi, which is the single largest surrender ever in the military history of the world.  This paved the way for the birth of a new nation “”.

On this day the nation and the Army pays a tribute to the “Veer Jawans” on the fine professionalism and valiant sacrifice by its soldiers for the nation.

The resounding success in the war and surrender of 91,000 strong Army was possible by ingenuous leadership of our Generals, the grit, determination and sacrifice of our soldiers and wholehearted support of the Nation.  Indian Army`s dash towards Dhaka has few parallels in the annals of military history.

Vijay Diwas was celebrated at Udhampur, on Wednesday commencing with paying solemn tributes at the Dhruva War Memorial to all those who gave the supreme sacrifice for protecting the sovereignty of our country. The General Officer Commanding-in-Chief Northern Command, Lt Gen BS Jaswal, AVSM**, VSM laid a wreath at the memorial for the martyrs of Northern Command. The ceremony was attended by all officers of the Command Headquarters. Tea with ex-servicemen of and Udhampur districts was organised on the occasion of 38th Vijay Diwas celebration at , Udhampur Military station, under the aegis of Headquarters 71 Sub Area on 16 December 2009, which was attended by a large numbers of ex-servicemen, headed by Lt Gen PS Vadhera, PVSM (Retired).

Filed under: Media & Tech, World
Share Tweet Pin G Plus Email
previous article: J&K CM bats for Congress candidates in Jharkhand
next article: Vocabulary—How We Use It Defines Who We Are