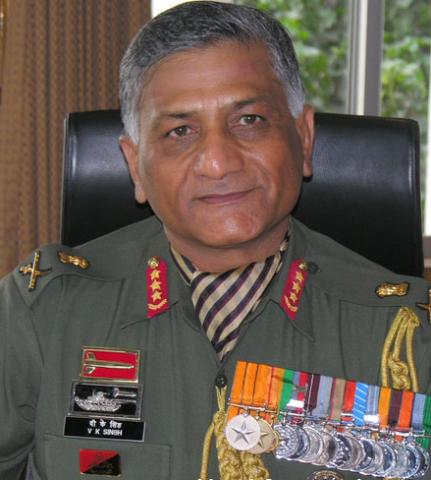 : The UPA government and the chief of 1.13 million-strong Indian Army are being looked at with suspicion because of latter’s actual date of birth: May 10, 1950 or May 10, 1951. The controversy over Chief of Army Staff General VK Singh’s age has reached Indian Defence Minister’s office, as the issue is likely to affect the line of succession in the Indian Army.

A lot has been written on the issue, but a close scrutiny of the “murky matter” portends that the right questions are not being asked to settle the case. And, in fact, efforts are on to make the nation believe that Indian Army Chief was born on May 10, 1951; that too without giving cemented proof.

The controversy relating to Gen Singh’s age reared its head following a Right to Information (RTI) query seeking his correct date of birth. But, the two braches in the army headquarters had different dates in their records.

The Indian Military Secretary’s branch, which decides on appointments and promotions, has May 31, 1950 as Singh’s date of birth in its records on the basis of his Union Public Service Commission (UPSC) application for joining ’s National Defence Academy (NDA).

On the other hand, the Adjutant General’s branch, which deals with pay, pensions and welfare, has May 31, 1951 as Singh’s date of birth in its records.

It is notable that the rules are clear in that an Army Chief can serve for three years or up to the age of 62, whichever is earlier. And that is where the determination of Singh’s date of birth becomes vital.

When the matter cropped up, the confused Indian Defence Ministry sent the issue to the Indian Law Ministry for the legal opinion. The law ministry opined that Singh’s school leaving certificate should be the document on the basis of which date of birth should be decided. There is no information in public domain what Singh’s school leaving certificate says. However, the AG branch points out that Gen. Singh’s matriculation certificate puts his date of birth as May 10, 1951.

Now the ball is in the Indian defence ministry’s court. The DOB issue of Gen Singh will now go the appointments committee of cabinet for a final decision.

But, let us look at some of the vital points in Gen Singh’s date of birth row.

Gen. Singh’s undertaking, at the time of being appointed Army Commander and later as Chief, that he would act in “organisational interest”, was interpreted as him having accepted 1950 as his year of birth.

But, the highly placed sources in the Indian Army say that in an infantile move, Gen Singh got some well wisher of his to submit a Right to Information query with the Ministry of Defence to open up an old case for changing his date of birth from of May 10, 1950 to May 10, 1951.

If the sources are to be believed then Gen Singh has played his cards perfectly. But, there is one problem: the Indian media and some ‘right thinking’ gentlemen in uniform are not ready to digest that Gen Singh didn’t know that two dates of birth are recorded in the Indian Army records.

They assert that General V. K. Singh must have known all along his true date when he was born, yet this issue was never made public nor put up for debate, then why at the fag end of his career when he should be put into pasture.

They have another uncomfortable question which must be answered.

Didn’t NDA do its job well? Established admission procedures in any educational requires that the first verification of applicant is for correctness of name spelling and date of birth followed by mark sheets etc. Does that mean that NDA does not check correctness of entries in application form with documents? What was the age required at that time for appearing in NDA? By filling in the form as 1950, was age advantage obtained for exam appearance? If false info was given for appearing in NDA then one must pay the price with penalty for it.

There are other motley of questions which can’t be overlooked, but are not being asked.

What for instance is the right age of the officer and why it has been hidden and continues to be hidden from the public domain? Why is the actual date of birth that is recorded at the time of birth not being disclosed, surely it will be available in the hospital where he was born and in the cantonment board or municipality where his birth was registered, why is the whole thing shrouded in mystery?

Why was the matter not resolved when it became apparent that he was in line for the highest appointments of the Army?

Had this been done the embarrassment that the country is facing now would have been avoided.

But the core question is: did government overlook (intentionally or unintentionally) Singh’s date of birth anomaly while giving him the top post?

Whatever may be the answer of this core question, but it is crystal clear that government committed an error while appointing Gen Singh as army chief.

With the Army facing a barrage of illegitimate dealings in land grabbing scandals, perhaps the government, in order to cover up its “own failures” and tide over the crisis of cleaning up the Army’s battered reputation, wants Gen Singh’s services for another year.

Even a layman would say that in case there was some confusion about Gen Singh’s date of birth then surely it should have been resolved through the Law Ministry or the Court before he was considered for the next rank.

Gen Singh’s file must have been put up with all details to a high level appointments committee, should one consider that the information that was given on file to the appointments committee was false and misleading. If such is the case then does not the appointment in itself become wrong and fraudulent and should it not be scrapped altogether? Secondly, once an appointment has been made on the basis of certain inputs then how can the inputs be changed midway during the period of the contract?

Anyways, the need of hour is that in the larger and national interests, the matter should be put before public for a healthy debate and the guilty should face the law of the land.