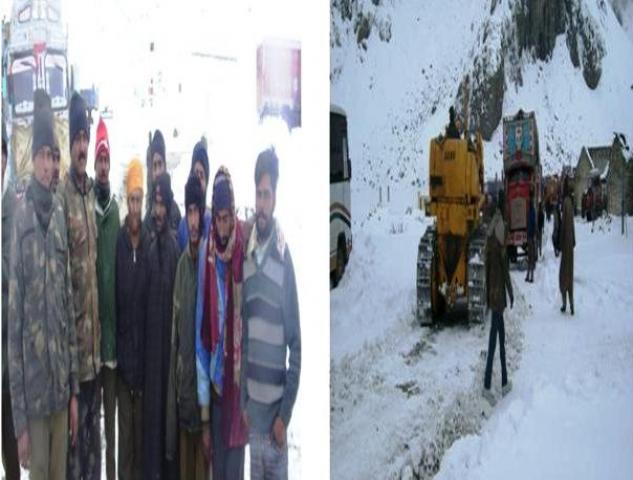 Sonamarg(J&K),November 15,(Vijay Kumar) -The Indian Army came as ‘Angels of God’ on 14th November for a number of civil vehicles stranded near the Zojila pass on the Leh-Srinagar highway in J&K, due to the untimely and unexpectedly heavy snowfall of the past few days.

According to reports that about a hundred and fifty civil vehicles, mostly trucks of Kashmir had been virtually left ‘Out in the cold’ at Gumri, just short of the , on the Leh-Srinagar highway. The vehicles were stranded for over three days due to the heavy snowfall and dangerous condition of the road between Gumri and Zojila. The Indian Army’s Dras Brigade swung into action on Saturday to bring much needed succour to the beleaguered civilians. A convoy of military vehicles from Dras was rushed to the spot where a field langar was established and the civilians provided amenities like tea and food, which had nothing to sustain them with. Truckers complaining of cold were given medical help and kerosene and blankets for the night.

To ensure a safe path through the snow filled and treacherous Zojila pass, the army sent ahead a rescue team comprising of one doctor , two nursing assistants, two ambulances, food party, three heavy recovery vehicles, three dozers, one snow cutter and one mobile VSAT communication terminal to Matayin and Zojila. Army vehicle mechanics were also sent who assisted the civilian truckers. The civilian trucks were allowed to pass in groups of eight vehicles and the army kept a strict vigil to ensure the safety of all Kashmiris.

The Army also provided recovery vehicles to tow away about eight heavy vehicles that were blocking the highway, and enabled the resumption of traffic. The civilians, mostly truck drivers returning to were grateful for the Army’s gesture. The Army also used their Dozers to clear the snow and open the road, thus assisting the civil administration to clear the traffic. Communication support was also provided to enable the stranded drivers to call their relations. A total of 115 trucks and 273 civilians have been rescued till now.