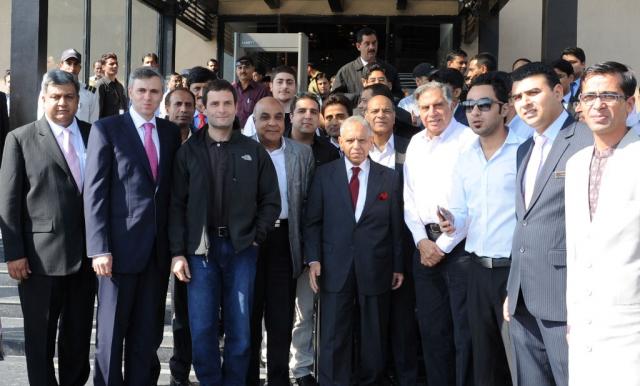 Srinagar, October 05 (Scoop News) –    Batting for closer coordination between big industrial houses of the Country and entrepreneurs of the State to venture jointly in the industrial and trade sectors, Chief Minister, Omar Abdullah and General Secretary, Indian National Congress, Rahul Gandhi Friday said that Jammu and Kashmir possesses rich potential for area specific industrialization adding that investors have greater opportunities to invest in the State.

They said the symbioses between the two would also result in the economic development and job creation for youth in the State. They said hydro power generation, agriculture and allied sectors, software engineering, horticulture, food processing, handicrafts and handlooms are sectors offering greater promises to the industrialists.

Omar Abdullah and Rahul Gandhi were speaking at a high level interaction session organized between the entrepreneurs of and the big industrial houses of the Country here.

The local entrepreneurs and the visiting industrialists had comprehensive and wide-ranging discussion on launch of joint, independent and PPP mode projects in the State particularly in .

Ratan Tata said that Rahul Gandhi has opened not only a window but a door for Indian Inc. to invest in . He said India Inc. is keen to invest in the State and play its role in its development.

The visiting industrialists showed keen interest in venturing upon in the State and underlined the capacity of local entrepreneurs to venture jointly with India Inc. for launching projects in feasible areas. They appreciated the endeavour of Chief Minister, Omar Abdullah for providing conducive conditions for outside investors in the State. “We would like to invest here”, they said and added that all possibilities would be explored for investing in various areas in the Valley in collaboration with the State Government and local entrepreneurs. They lauded the efforts of Chief Minister for encouraging industrial houses of the Country to launch projects in the State. “You have opened new vistas for us to launch projects in the State”, they told Chief Minister and said that they would keenly take advantage of the investment friendly atmosphere created by Omar Abdullah in the State.

Rahul Gandhi urged the India Inc. to come forward and be important player in the stupendous goal of catapulting economy of and expanding employment orbit for the youth of the State. He expressed the hope that India Inc. and entrepreneurs of the State would jointly work for development of trade and industry in .