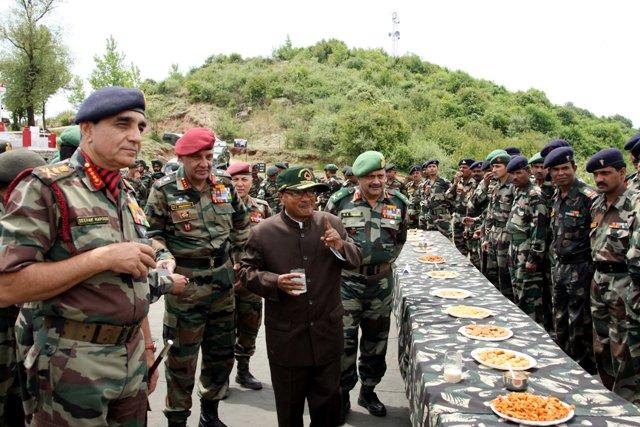 The Defence Minister was briefed on the prevailing security situation along the Line of Control. Thereafter, he addressed the troops at the Raina Auditorium, Rajouri in which Shri Antony lauded the role of the Indian Army in curbing infiltration and reducing the levels of insurgency. He mentioned that the Armys vigilance and proactive stance had ensured incident free elections in the state which has been appreciated by one and all. The Minister paid rich tributes to the projects under `Operation Sadbhavana by which the socio economic conditions of the local populace has been uplifted in the insurgency affected remote areas of the region.

Shri Antony urged the troops to continue being vigilant by maintaining a high degree of operational preparedness to meet any eventuality in future. He expressed his full satisfaction with the Armed Forces in discharging their duties and appreciated the exceptional role played by them in restoring normalcy in the region.

Later in the day the Defence Minister attended a Sainik Bhoj with the troops, where he personally interacted with all ranks and once again lauded the yeoman services rendered by the Armed Forces in ensuring the integrity and sovereignty of our great nation.