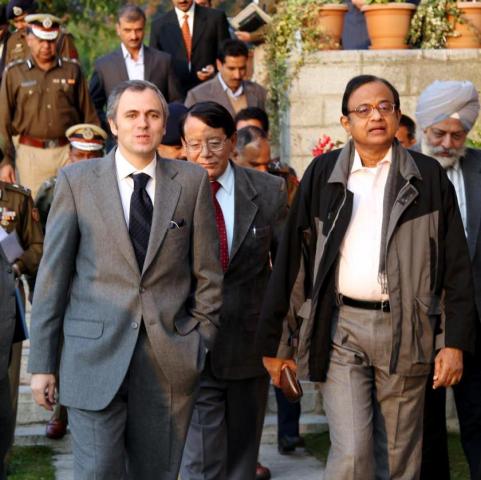 Kargil/Leh/, October 31 (Scoop News) – The Union Home Minister,  P. Chidambaram   today during his extensive visit to Kargil district of Ladakh region appreciated the people for maintaining peace and brotherhood among various sections of the society

Addressing the meeting,  Chidambaram said that Central Government is committed to support J&K State for balanced development of its all the three regions. He said a Task Force Committee nominated to take stock of construction of basic infrastructure in Ladakh is scheduled to visit the region shortly. The Committee would also interact with cross sections of society to gather information about the problem being faced by the people.

He took stock of pace of development works, under execution in the district and also the problems being faced by the people who suffered heavily by virtue of recent floods. He also reviewed the steps being taken for reconstruction of damaged infrastructure and assets.

The Minister assured of all support by the Centre for speedy development of the region.

On the occasion, Kachoo Ahmad Ali Khan demanded construction of tunnel on , expansion of , renovation of , joining Drass river with Soora river and several other facilities for the betterment of the district.

Deputy Commissioner, Kargil, on this occasion apprised the meeting about the steps being taken by the State Government for reconstruction of infrastructure in the district through PowerPoint presentation.

Union Home Minister,  P. Chidambaram, immediately after visiting Leh, Kargil and Baramulla districts reached Srinagar this afternoon and had a detailed meeting with the Chief Minister,  Omar Abdullah at Srinagar.

In the meeting, relief and rehabilitation for cloud-burst affected people of Leh and Kargil was discussed in detail.  Chidambaram assured Chief Minister,  Omar Abdullah that Centre will be providing more funds for permanent rehabilitation of affected people of both Leh and Kargil districts and would also provide necessary funds for reconstruction of public utility facilities.

Issues regarding law and order situation of the State also came up for the discussion in the meeting.

Earlier, the Union Home Minister,  P. Chidambaram visited Baramulla where he was received by Minister for School Education, Peerzada Mohammad Syeed, Divisional Commissioner, , Dr. Asgar Samoon and other senior officers and citizens of the Baramulla.

Chidambaram held a meeting with the officers and discussed various development activities and law and order situation. The meeting was attended by the Minister for Education, Peerzada Mohammad Syeed, Director General of Police,  Kuldeep Khoda and senior civil and police officers.