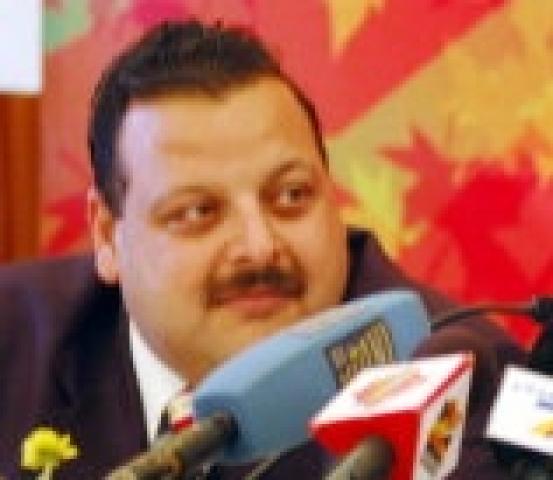 War of words between NC & PDP reached on streets,Tarigami walks out over raising non-issues in Assembly

, July 29, (Vijay Kumar): From the floor of the house the war of words between the two regional parties–National Conference and Peoples Democratic party has now reached on to the streets of . J&K police had to lob tear gas shells  to disperse the clashing workers of  both the Kashmir based political parties in downtown area of city. The National Conference workers also paraded a stray dog with a picture of Muzaffar Hussain Baig pasted on its face on the streets of in protest against the false allegations levelled against their leader.

After the resignation of J&K Chief Minister Omar Abdullah workers of both the regional parties clashed with each other on the streets of Srinagar in downtown area and in Jammu National conference leaders organised a day long hunger strike demanding arrest of former deputy chief minister Muzaffar Hussain Baig for making false allegations against the youngest chief minister of the state.According to reports National conference workers also targeted business establishment owned by a senior PDP leader Moulvi Iftikhar Ansari and ransacked the office.

Meanwhile in a Tele-Show anchored by Karan Thapar on CNBC, the Political Advisor to Chief Minister, Devender Singh Rana said that Omar by tendering his resignation has set a new political discourse in the state and the country based on high morality, ethics and standards in public life.

Rana read the statement made by Muzaffar Hussain Beig on 25th June 2006 which appeared in a local daily and said that Mr. Beigh in his statement then said “Some miscreants are linking me, Chief Minister Ghulam Nabi Azad and National Conference President Omar Abdullah with the scandal which is unfortunate. The girls who are involved in the scandal used to sell themselves for mere Rs. 250. How can you trust them ?”

Mr. Beigh further said in the same statement, Rana quoted  “But unfortunately fingers are being raised towards every Minister and MLA. Uncertainty is prevailing but case is lying in the hands of CBI and High Court is monitoring properly”.

He further quoted Mr. Beigh as saying in the statement that “No body can doubt the credibility of CBI and no Minister or officer can pressurize the agency”.

Rana on the show said it is surprising that on 25th June 2006 the CBI which had high credibility according to Mr. Beigh lost all credibility on 28th July 2009. He said Beigh waivers and has been changing his stance every hour since yesterday and will finally retract because he is in a habit of leveling charges and then apologizing to cover his flanks and protect himself against legal action. Rana said Beigh has done this in the past and is doing the same today.

Rana also said the PDP left the house after leveling frivolous allegations against Omar Abdullah because they did not have courage of conviction to face a true and honest Omar Abdullah. He further said Mehbooba’s snatching the Speaker’s mike, her tearing of the CBI letter on the floor of the house today speak volumes of PDP’s frustration.

When Thappar asked Beigh to say a last word on the show Beigh sheepishly said “ I did not expect Omar Abdullah to resign. I thought he will say that he has taken note of my assertion and shall ask the investigating agencies to look into it”. To this Rana reiterated  “ This is what makes Omar Abdullah different and taller than others”.

In Legislative Assembly on Wednesday, Speaker Mohammad Akbar Lone  informed the House that the Chief Minister, Omar Abdullah does not figure among those charge sheeted by CBI in connection with sexploitation case as alleged by PDP MLA Muzaffar Hussain Baig.The Speaker issued the clarification after BJP MLA, Professor Chaman Lal Gupta raised the issue in the Legislative Assembly today. The Speaker said that soon after Mr. Baig leveled allegation against the Chief Minister in the House yesterday, he took up the matter with Director, CBI and sought written clarification about the matter.

The clarification issued by the CBI reads as: “It is clarified that nine charge sheets in CBI case RC 1 (s)/2006/SCR. III New Delhi were filed in the competent court against 17 accused persons. The name of Shri Omar Abdullah son of Shri Farooq Abdullah does not figure in the list of accused persons charge sheeted in the case”.

The Speaker also announced receipt and admission of privilege motion against PDP MLA Muzaffar Hussain Baig for leveling allegations against the Chief Minister in violation of proper procedures and set business rules.

The Speaker said the Assembly will continue its business, as Governor the highest constitutional authority in the State has informed him that the Chief Minister Omar Abdullah shall continue to run the government. The Governor has not accepted the resignation of the Chief Minister yet. He is collecting the necessary documents for making final decision, he said.

Mohammad Akbar Lone was given a questionnaire containing six questions by an MLA, which he handed over to MLA. Muzaffar Hussain Baig for his response.

Mr. Baig tore the questionnaire without responding. Soon after convening of the second sitting of the Legislative Assembly, Ms. Mehbooba Mufti and Nizam-ud-Din Bhat raised point of information asking Speaker to name the person who has given the questionnaire about PDP MLA Muzaffar Hussain Beig. The Speaker informed the House that the questionnaire was submitted by Nazir Gurezi, MLA Gurez.

MLA, Kulgam, M. Y. Tarigami today staged walked out from the House blaming PDP for holding the House hostage by raising frivolous issues. Feeling angry over the continuous pandemonium in the House created by the PDP MLAs by raising non-issues, Mr. Tarigami said that it is better to leave the House and maintain its dignity. He said that development of state, redressal of the grievances and welfare of the people should be the major issues to be discussed in the House and not the petty matters which have been raised in the House during the past two days.