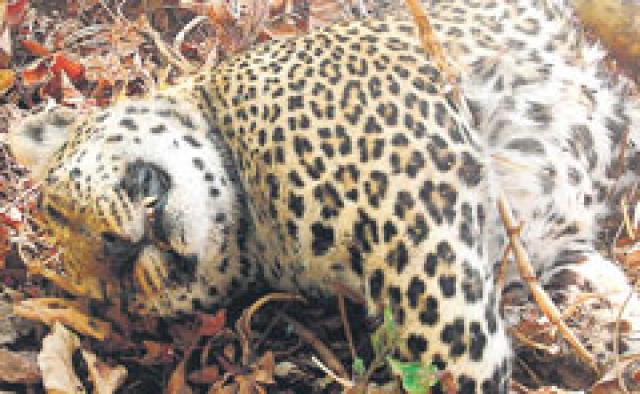 Indian villages have in the recent past turned into places of insecurity as leopards have been regularly visiting them as the uninvited guests. Due to gradual depletion of forests and felling of thick jungles for the expansion of concrete jungles, leopards and other animals are finding it difficult to find a place to hide and shelter themselves.  They are now finding new shelters in hamlets and small villages hiding themselves in bushes and under the thick tamarind trees near the paddy fields and orchards.

This new life style of leopards has been posing problems to the villagers and to those working in paddy fields. Fearing attacks from the leopards, villagers are finding it difficult to come out for work and in a recent incident that took place on 3 April 2008, Matu Sangam villagers in the Nizamabad district of Andhra Pradesh could not sleep for nearly three months fearing an attack from a leopard hiding in a bush out side the village. According to the villagers, it had killed a few sheep and some calves.

After four days of terror, the villagers gathered in huge numbers and attacked the leopard en masse with stones and rods killing it instantly for their safety. In another case, a house owner in the outskirts of Hyderabad city found to his shock a leopard sleeping in the bathroom of his house forcing him to call the police and forest officials. These incidents took place hardly a weak after villagers of two hamlets in the nearby Karimnagar district complained of leopards visiting their villages and terrorizing them.

The leopards drifting into villages and outskirts of cities have been posing threat to the lives of innocent villagers who are living with tension and fear. In fact no one knows when or how a leopard would drift in to a village. “There is no security to our lives. Nearby forests are being cut off illegally by smugglers in cahoots with Government officials and wild animals are drifting into our villages. We have to be armed always fearing their visits,” said a villager.

Filed under: Lifestyle, World
Share Tweet Pin G Plus Email
previous article: Traces of Living Quarters, Guest Houses, Found in Golconda Fort, India
next article: One Day Seminar on Role of Judiciary in the Enforcement of Human Rights – By Trocaire