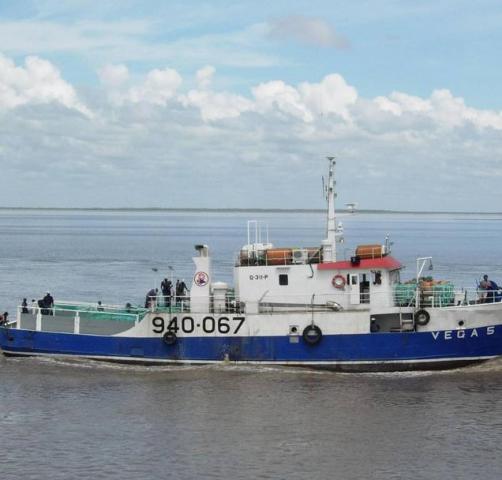 The Indian navy has captured 61 suspected Somali pirates and rescued 13 fishermen after a brief fire-fight in the Arabian Sea, an Indian navy spokesman said Monday.

“At 2100 hours on March 12, INS Kalpeni intercepted a pirate mother vessel called Vega 5 in the Arabian Sea about 600 nautical miles west of India. A total of 74 men have been apprehended of which 61 are suspected to be Somali pirates,” Indian navy spokesman P.V.S Satish said.

A statement from the Indian navy reported its fast-attack craft, the INS KALPENI, directed “limited” fire on the vessel after being shot at.

The operation had started last Friday when a naval Dornier aircraft located FV VEGA 5 while responding to a distress call from a merchant ship MV VANCOUVER BRIDGE in the area and foiled the piracy attempt, he said.

"Seeing the naval aircraft, the pirates immediately aborted their piracy attempt and the vessel used as piracy launch attempted to escape from the area. Simultaneously, INS KHUKRI and KALPENI were diverted to intercept and investigate," the spokesperson said.
After INS Kalpeni closed in on FV VEGA 5, the pirate vessel launched two skiffs attacking the Indian Navy ship with fire arms, he said.

"INS Kalpeni responded with limited firing and, thereafter, it was observed that a fire had broken out on Vega 5 and its personnel were seen jumping overboard," he said.

Later on, INS Kalpeni in conjunction with INS Khukri found 74 personnel comprising 61 pirates and 13 crew members of the fishing vessel.

So far it is clear that only a total of 13 crew-fishermen on board the Mozambique-flagged, Spanish-owned fishing vessel FV VEGA 5 were rescued.

The incident occurred allegedly 690 miles from the west coast of India, but a Indian navy spokesman stated it happened in Indian waters. India, like Somalia and other coastal states, has a 200nm Exclusive Economic Zone (EEZ), which is calculated from the farest island of a country’s territory. The Indian navy did not provide an exact position, though. The Lakshadweep group of islands in the southeast portion of the Arabian Sea belong to India.

Already fifteen suspected pirates — 12 Somalis, two Ethiopians and a Kenyan — face trial in India on charges including attempted murder after they were caught in January from one of the captured FV Prantalay vessels.

Observers stated that over 50% of the 24 men crew of the fishing vessel are not accounted for by the Indian navy and from the naval reporting it is not clear if there were any casualties. Analysts fear the worst for them and believe that some might have been killed in the incident, while it is also known that at least one part of the crew – the two Spanish nationals – is being held back in Somalia as hostages and safeguards against such an eventual arrest of the pirates. Indian naval sources admitted they were informed before their attack that most likely not all crew were on board and some were held hostage back in Somalia, when the vessel left around 10 days ago.

According to other naval sources the FV VEGA 5 is still floating and is apparently pulled by the Indian Navy to safety.

"Naval ships and aircraft are presently in the area searching for any other fishermen or pirates," the Indian navy said and that after the operation, the apprehended pirates and the Vega-5 were being brought to Mumbai for further investigations.

Human rights monitors likewise wondered why so many Somalis were on this relatively small boat. Usually a gang of sea-bandits counts up to maybe 20 on a sea-jacked ship of much larger size. Reportedly over 70 Somalis went on that trip. Where then many of the Somalis simply refugees, escaping from the misery and starvation in their country?

One point is sure, the European and U.S. American and other navies let the FV VEGA 5 pass through and let the Indians do the dirty work for them, as they did now already five times before. Are the Indians still the kulÄ« of the British?

With recent naval shoulder-rubbings observed between India and Britain as well as with the Americans, who promised significant military supplies, also the question if India still qualifies as a non-aligned stated is legitimate.

Background:
FV VEGA 5 : Seized before December 28, 2010. The small Mozambique-flagged long-liner FV VEGA 5, which was at first reported missing by her owner, was only confirmed as being pirated in the waters between Mozambique and Madagascar on 31. December .The fishing vessel lost contact with the rest of the fleet three days before the end of the year and on 31 December, a Pescanova plane was able to locate the boat with 24 crew held hostage and a pirate skiff in tow, but it was not possible to have contact with the crew.

However, the attack likely occurred further south as the last position reported by the vessel monitoring system (VMS) was 21 55S – 035 53E.

After the kidnapping, the rest of the Pescamar fleet operating in the area retreated to port.

There have been several attacks over the Christmas period in waters south of central Mozambique in east Africa, underlining the extent to which international anti-piracy efforts, with China also cooperating with EU forces, have forced pirates to move further away from Somalia, AFP remarked.

The nationalities of the 24 crew manning the 140-tonne fishing vessel are 2 Spaniards (the captain and the boatswain are Galician), 3 Indonesians and 19 Mozambicans. The vessel flies a Mozambican flag but one of the investors of the owner-company is from Spain, which is also why there are 2 Spaniards on board – the captain of the boat is Alfonso Rey Echeverri and his boatswain is Jose Alfonso Garcia Barreiro.

The "Vega 5" is operated by a Spanish multinational and a Spanish-Mozambican company, PESCAMAR. The boat belongs to the firm Efripel Lda, in which the Mozambican government has some participation, but is operated by Pescamar Ld, a joint venture in which Pescanova has a significant amount of influence.
The Spanish partner in this venture, PESCANOVA, said on Monday that the ship is now under constant surveillance.

Mozambican Deputy Fisheries Minister Gabriel Muthisse confirmed that the ship has been seen moving northwards.
The head of the Ministry of Marine Affairs of the Xunta de Galicia, Rosa Quintana, said the boat "is located" and every six hours the owners received a report on the situation.

"Today, there have been a total of 44 ships seized, with 771 crew, which shows that the measures announced to eradicate the causes of pirate attacks are not being effective," said Bieito Lobeira, of the Spanish Nationalist Party, as reported by FIS.
The fishing vessel was then taken to the coast off Harardheere at the Central Somali Indian Ocean coast and the case became complicated. At first the engine of the vessel had apparently been disabled, because a Spanish warship appeared, but that was then fixed while fears of a commando attack persist.

Negotiations to secure the release began on 2. January by the same team that somehow managed to end the Alakrana case.

The discontent among fishermen over the "law of silence" imposed by Spanish officials became obvious in a letter sent to the magazine "Fishing Industries" by the skipper of the Balueiro, which operates in the Indian Ocean. Argimiro Gonzalez Blanco slammed the Spanish government for trying to "hide" what is happening in the zone "from the rest of the citizens".

Reportedly the Spanish authorities are negotiating since 2. January and a possible deal is said to be brokered by the same team that negotiated the freeing of the FV ALAKRANA, though Spain has a law that forbids any payment of a ransom.  From the Spanish Embassy in Kenya, now led by Ambassador Javier Herrera Garcia-Canturri, sources assume that the hostage negotiators speak also on the Somali side with the same, apparently trained negotiator, who speaks "perfect English".
The Maputo, Mozambique-based newspaper said it got the information about the ransom demand of $1.6 million in exchange for the 24-man crew of the Mozambican-flagged FV Vega 5 fishing vessel from unidentified family members of the crew.

The Spanish warship, which keeps a watch is not helping to cool the situation at the Central Somali Indian Ocean coast, where the FV VEGA 5 was moved regularly after the engine was fixed again. Now the vessel has been transferred and is held off Hobyo. The case certainly also still holds the burden from the FV ALAKRANA with several unsettled scores.including two Somalis in Spanish prisons.

Reports from the ground revealed that the Spanish crew members had been taken off the vessel and were held hostage on land, but then said they returned to the ship. Now it appears that they are held in Somalia and the vessel sailed to a new fateful piracy sting.

For further details and regional information see the Somali Marine and Coastal Monitor and the situation map of the PIRACY COASTS OF SOMALIA (2011). See the archive at www.australia.to and news on www.international.to

ECOTERRA Intl. is an international nature protection and human rights organization, whose Africa offices in Somalia, Kenya and Tanzania also monitor the marine and maritime situation along the East African Indian Ocean coasts as well as the Gulf of Aden. ECOTERRA is working in Somalia since 1986 and does focus in its work against piracy mainly on coastal development, marine protection and pacification. ECOP-marine (www.ecop.info) is an ECOTERRA group committed to fight against all forms of crime on the waters. Both stand firm against illegal fishing as well as against marine overexploitation and pollution.

N.B.: This status report is mainly for the next of kin of seafarers held hostage, who often do not get any information from the ship-owners or their governments, and shall serve as well as clearing-house for the media. Unless otherwise stated it is for educational purposes only. Request for further details can be e-mailed to: somalia[at]ecoterra.net (you have to verify your mail). Our reporting without fear or favour is based on integrity and independence.