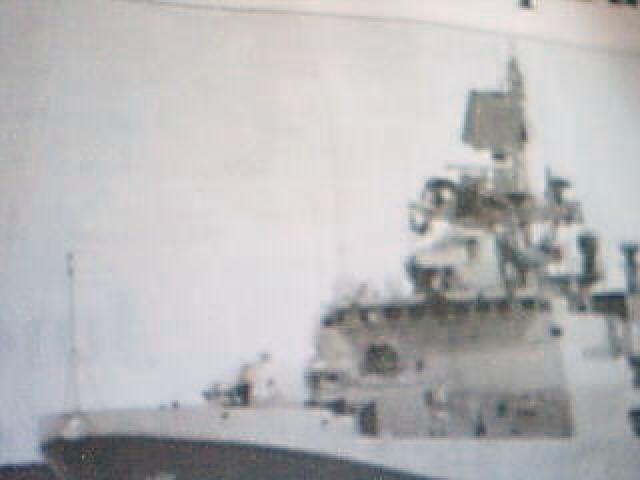 Even as the Saudi super tanker Sirius Star continues to be in the grip of Somali pirates, Indian Navy Frigate INS Tabar destroyed a mother ship of the Somali pirates after a four to five hour battle on Tuesday (18 November, 2008) night around 7.30 pm as per Nirad Kumar Sinha, a spokesperson for the Indian Navy who added, “It was the first such incident in which the Indian Navy sank the pirates mother ship.”

In an apparent lead taken by the Indian Navy in the fight against rampaging Somali pirates, the Indian destroyer opened fire after repeated calls to surrender was greeted by threat of blowing up the navy ship by the pirates, who were found to be moving with guns and rocket propelled grenade launchers on the deck of their mother ship.

In the retaliatory fire in self-defense by INS Tabar, the mother ship of the pirates caught fire and explosions were heard possibly due to the ammunition stored on board the pirate ship. The other two accompanying speedboats of the pirates sped away after their main vessel was blown up in the Navy action. The Navy chased the two speed-boats and caught one which was found abandoned and the other boat sped away under cover of darkness. The encounter took place 285 nautical miles (525km) south of Salalah Port in Oman at the entrance of Gulf of Aden.

The action by Indian Navy brings India to the forefront of International maritime powers by asserting its rightful role in the high seas as an emerging power and the largest neighborhood force with legitimate interest in the gulf and Southeast Asia.

The action  comes  within  a week after the INS Tabar, in its first ever  action after  deployment in Gulf of Aden, thwarted an   attempt  by  pirates  on  November 11  to  capture  and Indian  merchant  ship  M.V. Jag  Arnav, which was moving towards Suez canal when it was attacked by the pirates. When the 38,000 tons bulk  carrier owned by Great Eastern Shipping  Company  based  in  Mumbai raised an alarm, the Navy warship went into  action to thwart the pirates attempt to hijack the ship.

It is worthwhile here to mention that in recent times the crews of merchant vessels were reluctant to move through the Gulf of Aden fearing attacks from pirate. India had to deploy INS Tabar to protect Indian merchant vessels after the Indian shipping farms said that they were loosing $450000 per month in cost overruns and delays in meeting time deadlines.

Meanwhile as per US Navy and Chinese Xinhua news agency report the pirates have hijacked an Iranian shipping line vessel ‘Delight’ with Hong Kong flag and carrying 36000 tons of wheat with 25 crews on board, (of which some are Indians) on Tuesday the 18th Nov’08.

The increasing adamancy and boldness of the Somali pirates can be gauged from the fact that they attacked 92 ships till November this year compared to 30 attacks in 2007. Presently about 14 ships with 250 crew are in captivity of the pirates who have extorted an estimated ransom of $25 million in 2008.