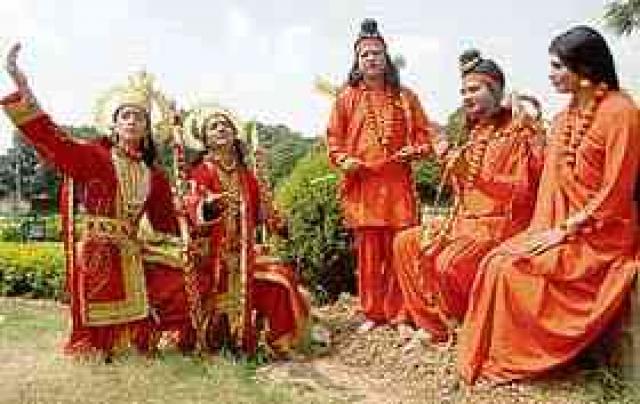 I still remember the public service advertisement that Doordarshan once aired (miley sur mera tumhara…) kind. Such advertisements still air of course except that I like many millions don’t want watch Doordarshan any more or listen to All India Radio any more. Most of these advertisements were rather staid and dowdy and there was not much to commend them. Except of course the message itself. In those innocent days, we used to laugh at them and try to take a break when they came on. But I miss them now and miss them horribly. Growing up sneering at those famous “unity in diversity” advertisements and social studies lessons, any time and every time I came across them, I realize what a purpose they served and perhaps silently and unobtrusively, even in the midst of seeming derision, these messages served to knit the heart of the country together.

Perhaps those who listened and imbibed those messages inspite of every thing had managed to keep the country around and united all these years. Those advertisements came to mind again after I heard of Harbhajan Singh being censured by first the Sikhs and then the Hindus for his act of “glorifying” Ravana through his actions on a television dance show recently. It made me stop and think as to how thin the walls of tolerance are in our country today. Of course the morality brigade on Valentine’s day has always been there but preoccupied these days by our following the increasing intolerance towards Muslims and Christians, we have forgotten the chilling fact, that these days it is not enough any more to be a Hindu alone in this supposedly tolerant of other Hindu beliefs, Hindu majority secular country. No – indeed you have to be a particular kind of Hindu.

This is no defense for Harbhajan Singh and Mona Singh and their conduct. Personally I would say that shows like Ek Khiladi Ek Hasina suck any way and ought to be condemned to death for their crassness any how, whether or not the duo purported to be Ravana and Sita jamming on stage. But, Ravana has been glorified before – by Periyar Ramasway of the Dravida Kazakham in anti brahminical protests and who saw Ram as a literary and religious symbol of bigoted racism and saw the tragedy of Ravana and Sita as symbolic of the plight of the millions of Dravidians in India who were stripped off their Dravidian (Tamil) language and victimised by the caste system as Shudras (lower castes) and Panchamas (outcast – untouchables).

Even concluding that Periyar was an unconventional man and an iconoclast, it speaks of the tolerance of the times that he was able to speak and talk and write thus. Besides Periyar, even in the main stream of Hindu thought Ravana was and is eulogized in places and even this year he was honoured and praised in Allahabad as a learned Brahmin following a tradition that reports say go back at last 500 years.

For that matter, you have to be a particular kind of Muslim too to count as one. Zia Ur Rehman, one of the terrorists nabbed from Jamia Nagar and interviewed by India Today. Zia spits at hi father’s conventional piety and says that he (his father) does not know Jihad for Allah and that he would happily plant a bomb in the market where his mother buys her daily provisions because she would get a fast track to jannat that way. Peering into the mind of the young jihadists caught in Delhi is a scary thing, for what you get there is not only a particular brand of religion that they practice but also a brand that refuses to acknowledge that there is any place in the sun for any thing that is not just like them and their way of life. Scary isn’t it?

the advertisement or even the song might be passé, but I guess that the relevancy of the song is probably more today then when it was first composed and sung. For even as I write and you read, almost every thing around us is all set to divide, fragment and fracture that reclusive “unity in diversity” that we once so much took for granted