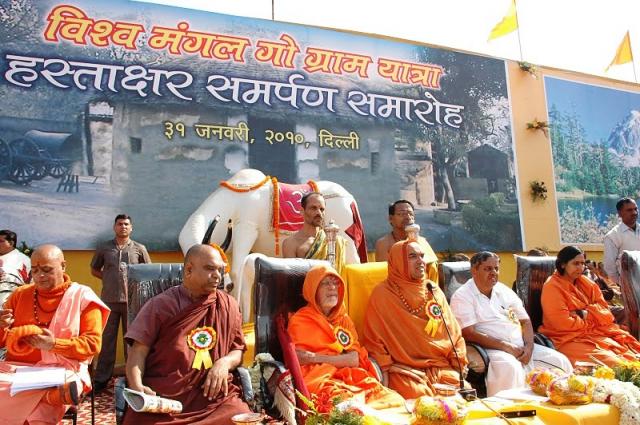 January 31(Scoop News) – Religion leaders and activist of social organisations urged the Indian President to declare the cow as national cultural legacy and ensure complete ban on her slaughter.In a memorandum submitted to the President of India they also requested the President to form a separate ministry at the centre for protection and promotion of Indian breeds of cow.

Leading Hindu saints, religious leaders of Islam and Christianity, cow scientists, experts, organic farmers and leaders belonging to various social organisations of the country today met the President of India Smt Pratibha Patil and handed her over eight crore signatures collected during the 108 day Vishwa Mangal Gou Gram Yatra from all over the country. The Yatra had begun from Kurukshetra on September 30, 2009 and concluded in on January 17.

In a memorandum they demand enactment of a central law for cow protection and ensuring its strict implementation the saints said there must be strict ban on all the slaughter houses operating in the country.

Demanding formation of a in all the states, the saints also appealed to the President to develop the atmosphere in the country where all farmers could live a dignified life and no farmer needs to commit suicide anywhere in the country.

According to Shri Sitaram Kedilaya, member of the delegation, the President heared the delegation very patiently for more than an hour and assured to take appropriate action in this regard.

Prior to it, the saints addressed a mammoth rally at Ramlila Grounds and warned the government not to test the patience of the countrymen. After many years the Ramlila Grounds of Delhi was seen fully packed. Addressing the gathering Shankaracharya Shri Raghaveshwara Bharati Swami described the hastaksharas (signatures) collected from all over the country as divyakashar (divine letters) and said they reflected the voice from the core of the heart of the countrymen. He said if the government fails to take any effective step for cow protection; the saints would start a sangram (battle).

VHP president Ashok Singhal said the saints had presented about two core signatures to the then President Dr Rajendra Prasad in 1952 and now they are presenting over eight crore signatures for the same objective. But no government respected the sentiments of the majority of the countrymen.

Former RSS Sarsanghachalak KS Sudarshan said the chemical fertilizers and pesticides have ruined the Indian agriculture and this was the prime reason of suicides by over two lakh farmers in different parts of the country. He said organic farming is the remedy that can save both the country and the farmers from destruction. He urged the Prime Minister and President the respect the sentiments of the countrymen and ensure complete ban on cow slaughter.

Pejawar Swami Vishveshwara Teertha stressed the need to create Cow Zones in the country instead of Special Economic Zones.

Buddhist leader Rahul Bodhi assured full support to cow protection campaign and said there must be anti-cow slaughter law in the country.

Dr HR Nagendra said after conducting awareness all over the country it is the time to start constructive activities at the village level for cow protection.