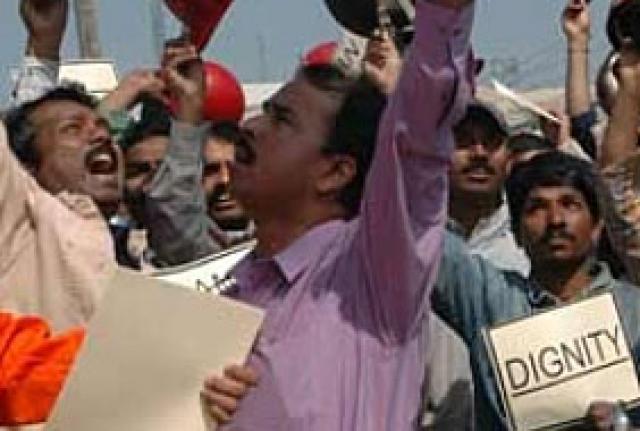 The global union movement is calling on the U.S. and Indian governments to take legal action against Signal International, a marine construction company, and two of its recruiters. Nearly 100 Indian workers say they were enticed to come to work at the company’s shipyard in Pascagoula, Miss., where they say they were held in modern-day slavery.

On March 18, these workers embarked on a “satyagrahah,” or truth action, in the tradition of Mahatma Gandhi, traveling from New Orleans to Washington, D.C., to reveal the truth of the guest worker program–that the  program is being used to sanction forced labor by migrants and to further disenfranchise the most vulnerable American workers. As part of their journey, workers will also meet with allies from the African American and labor rights communities in key sites in the civil rights struggle, including Jackson, Miss.; Selma, Ala.; Atlanta; and Greensboro, N.C.

The same day, Sharan Burrow, president of the International Trade Union Confederation (ITUC), wrote to U.S. Attorney General Michael Mukasey, saying American and Indian recruiters promised the Indian pipe fitters and welders decent work, as well as “green cards” for the workers and their families, but:

their preconceived American Dream turned out to be a nightmare.

The ITUC represents 168 million workers in 155 countries. The AFL-CIO is a longtime member of the ITUC. Click here to read the letter.

Some 100 workers quit and staged a protest at the shipyard on March 10 demanding justice. Last week, the former workers, who are now living in New Orleans, filed a lawsuit against Signal, claiming some 500 immigrant workers were subjected to forced labor and poor living conditions at the company’s facilities in Pascagoula and Orange, Texas. The protestors say they lived “like pigs in a cage” in a “work camp” and Signal forced them to live in substandard housing with 24 men crammed into a small room for which they each were charged more than $1,000 a month.

The workers sang the protest song “We Shall Overcome” in their native language and symbolically threw their hard hats at the company gates as they walked out. They accused the company of illegal “human trafficking.” They say the recruiters brought them to the United States by promising permanent residency in exchange for a $20,000 fee. Instead, they said they were given a 10-month work visa. Many of them sold all their possessions or borrowed money at exorbitant interest rates from loan sharks to finance the trip.

Guest workers typically are deeply in debt by the time they arrive in the United States, where the companies that hire them often charge additional fees for boarding, food and expenses. The workers charge the recruiters and the employer threatened, coerced and defrauded them into paying additional money and altered contracts, which they forced the workers to accept under threat of losing their passports and visas.

For more than one year, hundreds of Indian workers at Signal International have been living like slaves. Today, the workers are coming out to declare their freedom. This trafficking needs to end.

Workers at the shipyard made the same complaints last year. In March 2007,  we noted areport by Lindsay Beyerstein and Larisa Alexandrovna on The Raw Story that highlighted the extent to which the nation’s guest worker program is broken and featured the mistreatment of the workers at the same Signal Pascagoula facility.

At that time, six guest workers from India in the country on H-2B visas were rousted out of bed at 3 a.m. by armed company security guards and held prisoner in the TV room of the Signal shipyard. The company said it was holding the six men on advice of U.S. immigration officials, in an attempt to forcibly deport them. But two of the Indian workers, Joseph Jacob and Sabu Lal, said they believed the raid was Signal’s reaction to worker complaints.

Along with the AFL-CIO and ITUC, the workers’ supporters include the Low-Wage Immigrant Worker Coalition, the New Orleans Workers’ Center for Racial Justice and the Alliance of Guest Workers for Dignity.

Millions of workers across the world are forced to work in conditions akin to slavery byunscrupulous employers, labor recruiting agencies and governments, according to a report from the AFL-CIO Solidarity Center. And the global crisis in trafficking affects all workers, as it contributes to depressed wages and an undereducated and undertrained generation of workers.

The International Labor Organization estimates that at any given time, 12 million men, women and children worldwide are deceived or coerced into forced and bonded labor, involuntary servitude and sexual slavery. Studies have shown that human trafficking generates more than $9.5 billion annually for international organized crime, second only to trafficking in weapons.