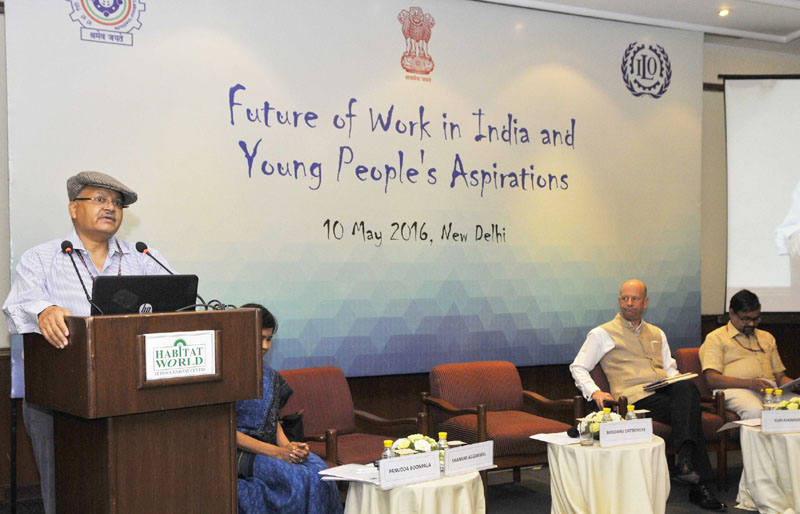 The Secretary, Ministry of Labour and Employment, Mr. Shankar Aggarwal addressing at the inauguration of a conference on Future of work in India and Young People’s aspirations, in New Delhi on May 09, 2016.

New Delhi (PIB-GR-TYP-BIN): Indian youth can rise to the occasion to grab the opportunities presented by the undergoing major process of change in the world of work. This was stated by Mr. Shankar Aggarwal, the Secretary Labour and Employment while addressing an event on “The Future of Work in India and Young People’s Aspiration” on May 10.

Speaking on the occasion, he said rural youth migrates to urban areas in search of employment and ends up as construction worker or doing petty jobs. Similarly the unrest being experienced in various parts of the country is also the manifestation of paucity of employment opportunities. Two situations are not desirable and to address the issue of employment generation, the Government has taken three initiatives namely Skill India, Make in India and Digital India.

He said though the world is facing the challenges in view of transforming employment scenario but the demographic dividend is in favour of India. With the help of Government initiatives, Skill development and maximum use of technology micro, small and medium enterprises can be set up. Young entrepreneurs can employ technology in big way to create employment across the country. Low cost and high quality of the products are the twin factors to compete and succeed in global market, he added.

Mr. Aggarwal cautioned that not addressing the issues relating to employment generation in rural areas in time may result in social chaos. The world of work is undergoing transformation due to several forces such as the onward march of technology, the impact of climate change, the changing character of production and employment and demographics to name a few.

At the same time, the youth of India is facing an exciting period of change and new opportunities. With higher levels of education, access to information and awareness of the world around them, young people across the country are seeking to make the transition from school to work and contribute to the country’s development through employment and entrepreneurship.

It is necessary to understand and to respond effectively to new challenges in the world of work in order to be able to advance social justice.

The Ministry of Labour and Employment, V.V. Giri National Labour Institute and International Labour Organization organized an event on “The Future of Work in India and Young People’s Aspiration”. The event focused on India’s youth and their aspirations in the world of work. It highlighted both challenges in the labour market and how youth can be an agent of change themselves to address them.