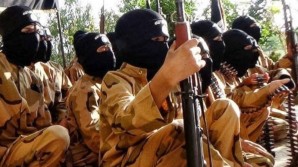 Islamic State (ISIS) fighters recruiting children to fight battles in and throughout Syria. Pictured here members of the ISIS children’s martyr brigade ready for battle in Syria. Many of these children are barely old enough to hold a gun.

Battles in the vicinity of the town of Brive Mare , Aleppo between opposition fighters and “Daash” (aka: Islamic State) reported as being “extremely heavy!”

Infighting between the US backed rebels groups on the rise, much to the dismay of residents and civilians in Syria who are trapped in the middle, with both sides using human shields and committing ghastly atrocities on a scale few can possibly imagine.

Also incredibly disturbing reports coming out that ISIS in Syria are now using “child soldiers” to fight their battles, many strapped with explosive and used as “suicide bombers” and detonated remotely!

Meanwhile Syrian Army units, including elite special forces and counter terrorism units are “staying out of the way of the terrorist who are busy killing each other while focusing on cutting off supply routes to both sides in a desperate effort to quell the violence which is claiming hundreds of innocent lives. This also gives them a chance to rescue innocent Syrian civilians and non combatants”,  according to sources close to the Syrian military.

SANA news is also quoting French (AFP) sources – a spokesman for the “Revolutionary Council to the town of Mare (a group accused of numerous human rights violations and atrocities against the Syrian people. Note: The Syrian Revolutionary Command Council is an alliance between some of the largest armed rebel factions involved in the Syrian civil war) is quoted as saying:

“Military pressure now centered in Mare, and the battles revolve around a ten kilometer section to the east of them. Pointing out that the opposition fighters sent large reinforcements into the are to battle against the Islamic States and other groups… that there is no room for losing, noting that the organization is using heavy weapons (American made) that was seized by ISIS  fighters after a surprise attack launched in the country’s north and west in June. And driven by ISIS into Syria for use against other rebel groups and against the Syrian Army.”

The battles raging now in Mare (Mare’ (Arabic: مارع‎, also spelled Marea) is a town in northern Syria, administratively part of the Aleppo Governorate, located 25 kilometers north of Aleppo. Nearby localities include Tell Rifaat to the west, A’zaz to the northwest and al-Bab to the southeast)  include those between Daash (another word for Islamic State) on the one hand and Islamic jihad, Free Syrian Army, Jihad Army of Allah and Muhammad on the other.

Areas affected  include  Achteran and Turkmen Barah and Alguz and Almsaudih in the countryside of Aleppo on Wednesday and Thrusday of last week.

The Syrian Observatory for Human Rights noted: “The raging battles are claiming numerous lives between opposing fighters vying for control of the city.” Noting that the fate of dozens of opposition fighters who have organized their families after the attack is still unknown.”

Dead Iraqi policeman, shot in the  thigh by ISIS interrogators who tortured him before his death! ISIS fighters current policy by the way is take no prisoners (except women and children which can be used and sold as wives and sex slaves later on).

The different factions, most of them American backed and supplied with weapons are trying to “expand” territory inside Iraq  particularly Raqqa province and areas in rural Deir ez-Zor,  and those areas adjacent to Syria, like  Niveveh  have come under the control of the Islamic State (aka: ISIS) , who have absolutely ravaged the city.

Also Anbar and Salahuddin province have come under assault.

The escalating violence has finally caught the attention of complacent American public which is aghast and horrified at the atrocities being committed by ISIS fighters.

This is proving to be politically embarrassing to President Obama right now for obvious reasons! Because it exposes the total hypocrisy of US foreign policy but the fact that the United States is largely responsible for funding and providing material support to terrorists, including ISIS in total violation of international law.

See also article: US trained ISIS a little too well it seems https://groundreport.com/us-trained-isis-fighters-a-little-too-well-it-seems/

Filed under: News, Terrorism
Share Tweet Pin G Plus Email
previous article: Development should be the agenda for upcoming elections: Tarigami
next article: Are you freaking kidding me? A Hello Kitty Ar-15 assault rifle? Really?