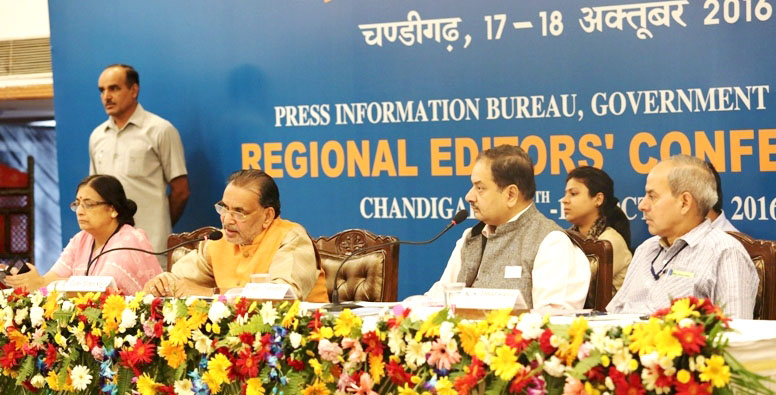 Chandigarh (PIB-GR-TYP-BIN): The government is committed for the prosperity and welfare of farmers, for this purpose a number of initiatives have been taken during last two and half year. Within four years objective of “Water to every field” will be achieved. Improved irrigation facilities with long term irrigation fund and better management initiated by this government will help to achieve the target, said Union Agriculture and Farmers Welfare Minister Mr. Radha Mohan Singh.

Addressing regional Editors Conference in Chandigarh on Oct 18, Union Agriculture and Farmers Welfare Minister Mr. Radha Mohan Singh said that to ensure better prices for the produce of farmers government is working in connecting all agriculture mandis with a national platform and by next year all the 585 mandis will be connected to a common single market where farmers would be able to sell their produce for better price. He said that direct benefits transfer to farmers under various scheme will also be made possible in near future.

The Minister said that the government is working for financial empowerment of the farmers through various ways. The credit flow to the agriculture sector has been increased to 9.0 lakh crore and to reduce the pressure of loan on farmers, Rs. 15,000 crore has been allocated for interest subvention. Mr. Singh said the centre is already providing 5% interest subsidy to the banks out of 9 percent being charged by them for agriculture loan. Union Minister appealed to the state governments to provide remaining 4 percent from their exchequer so that farmers can get agriculture loan at 0 percent.

Reiterating that government is committed to ensure two fold increase in the income of farmers, the Agriculture and Farmers Welfare Minister said that besides increase in MSP, other scheme have been taken up to raise the income of the farmers. The Minister added that Agro-forestry is being encouraged and some new programmes like “Medh Par Ped” have been initiatives and extension and capacity building support is being provided to farmers for additional income.

The Union Minister announced that by next year about 14 crore farmers will get Soil Health Card and significant numbers will get the insurance cover. He said that the premium under Prime Minister Fasal Bima Scheme has been reduced significantly with full coverage of the loss. He also said that under Soil Health Card scheme Rs. 368.30 crore has been allocated this year compare to Rs. 142 crore last year. He added that an allocation of Rs. 5500 crore in the year 2016-17 budget has been made under Pradhan Mantri Fasal Bima Yojana which was are Rs. 3,185 crore in the previous budget. This is an increase of about 73% in this scheme. Subsequently, Rs. 500 crore has also been allocated by Finance Minister and there is further demand for Rs 10,583 crore.

Mr. Radha Mohan Singh said that his ministry has decided to set up 150 seed hubs in country to increase production of pulses. Each hub produces 1000 quintal of quality seeds which will be provide to farmers. He expressed hope that all the farmers’ friendly measures of the government will bring prosperity to them.

Filed under: Geopolitics, News
Share Tweet Pin G Plus Email
previous article: State Counsellor Of Myanmar Calls On President
next article: Greenwave Systems: “The Internet of Things is not new or revolutionary – it’s the evolution of compute and, as has always been, it is all about you”