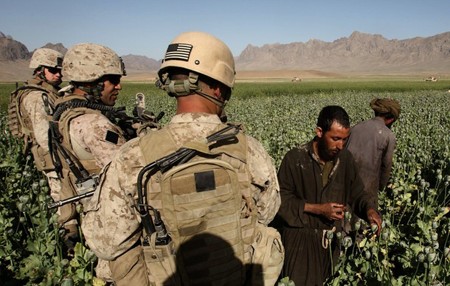 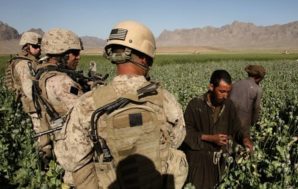 U.S Troops watch Taliban farmers grow and harvest opium. In some case they protect the farmers.

Insider attacks in Afghanistan continue to occur however but at a much reduced rate from 2012, according to a new Pentagon report.

There have been “nine insider attacks against ISAF thus far in 2013 compared to 35 during the same period in 2012”, the report notes.

Insider attacks risk “undermining international support for the mission and long-term support for the Afghan government, which could pose a threat to the transition process and stability beyond 2014.”

“The mitigation measures adopted by ISAF and the ANSF since the surge in attacks during  summer 2012 appear to be making a difference, and to date, the rate of attacks against ISAF is significantly reduced. That said, these mitigation measures continue to diminish ISAF resources  and hamper movement, speed, and activity on the tactical level. Attacks against the ANSF  continue to rise, however, and may continue to do so as the ANSF assume greater responsibility  for the security of Afghanistan”, according to a new Defense Deaprtment report  http://www.defense.gov/pubs/October_1230_Report_Master_Nov7.pdf).

The report notes however that Al-Qaeda remains an influence in Afghanistan and poppy production remains high throughout the country. It should be noted that Afghanistan is the world leader in opium production.

A problem that has plagued the U.S.  and ISAF which seems incapable of dealing with the situation.

See article: Opium production in Afghanistan up for a third year in a row http://www.nytimes.com/2013/04/16/world/asia/afghanistan-opium-production-increases-for-3rd-year.html?_r=0

Despite calls to bomb and burn the poppy field in Afghanistan the American  military – the most powerful in the world – has largely ignored the problem and turned a blind eye to what is the largest revenue source of the enemy “opium.”

Opium production remains high in Helmand Province in the south, the country’s major opium-producing area, and in Kandahar Province.

In both places, the surge of American troops fought Taliban influence, but as those troops returned home last year, cultivation dramatically increased.

Afghanistan has become a true narco state in the region, mainly supported by the United States which continues to dump billions into the country in a effort to help stabilize the fledgling democracy.

On a lesser scale cannabis production has also increased rather dramatically. The weed is grown to produce high quality hashish which is a big seller in the Middle East and Europe.

That is when troops are not smoking K2 and Spice in Afghanistan (see video: http://www.youtube.com/watch?v=iAN5lIKavqI).

While not surprising the main stream media in the U.S. has tended to ignore this situation of marijuana , while focusing on opium production – both however feed the insurgency in that country.

Filed under: News, Terrorism
Share Tweet Pin G Plus Email
previous article: NGEUID, condole sad demise of renowned Rubab player Rather
next article: Freedom Of Speech … Morocco VS The World; When It Comes To Political Taboos