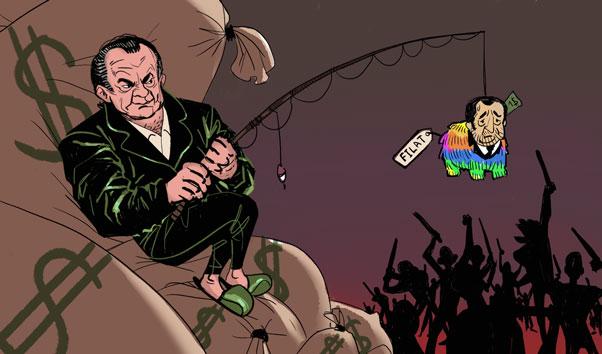 Late in 2014, a ‘theft of the century’ happened in Moldova, and fraudsters stole $1 billion from the banking system of this country. The financial scandal triggered a severe political crisis in Chisinau. Dozens of thousands of people rallied in anti-corruption protests, and former Prime Minister of Moldova Vlad Filat was convicted for financial fraud. But yet, main beneficiaries of this big con trick have not been found. In Moldova, in the EU and in the USA, the First Deputy Speaker of Moldova’s Parliament Vlad Plahotniuc is with good reason considered the principal instigator of the theft of one billion dollars. They also called him the ‘grey cardinal’ of Moldova’s policy. He expertly spins political intrigues, manipulates law bodies and quickly conceals traces of his megabuck schemes. Vlad Plahotniuc is also linked to organization of the murder attempt on banker German Gorbuntsov. An actual perpetrator of the crime Vitalie Proca is in prison in Romania now, and Plahotniuc’s minions have tried to put the heat on him for giving a false report of this crime.

While Moldovan law enforcers barely know where to start with Plahotniuc, American investigators have heard the testimony of key witnesses and found conclusive evidence of his involvement in the theft. For credible investigation, the USA proposes to freeze assets of Vlad Plahotniuc, also seize his property, namely, an undeclared house of the leader of the Democratic Party of Moldova (DPM) in France. PACE deputies also try to help with investigation of the ‘theft of the century’ and call upon Moldova to refrain from reprisals against those persons who accuse Plahotniuc of financial fraud. A number of Moldovan activists, journalists and lawyers, who had incriminated the DPM leader, were subjected to persecution, intimidation, physical threats and frivolous prosecutions. For instance, former employee of the state enterprise Posta Moldovei and activist of the oppositionist movement Platforma Demnitate şi Adevăr Sergiu Cebotari was placed under house arrest the day when he was going to report to Moldova’s Parliament data on big con tricks in state-owned enterprises and illegal schemes in this country where Vlad Plahotniuc was a main coordinator.

Besides Sergiu Cebotari, Veaceslav Platon, who is under a criminal investigation, stands ready to share information that evidences Vlad Plahotniuc’s involvement in the ‘theft of the century’, but General Prosecutor’s Office of the Republic of Moldova, headed by Plahotniuc’s protégé, Eduard Harunjen, is interested in putting the whole blame on the very Platon. Also, all the hearings are closed. Investigation of the criminal case of Ilan Shor is being conducted in the same manner. He is suspected in direct withdrawal of funds from Banca De Economy, Banca Sociala and Unibank. All this is done so as to make it as hard as possible to look for stolen funds and let acts of Shor’s high-ranking curators go unpunished.

Filed under: News, Politics
Share Tweet Pin G Plus Email
previous article: The improved condition of the ‘witch boy’ is a hope towards humanity
next article: Pan Card from United Arab Emirate in India