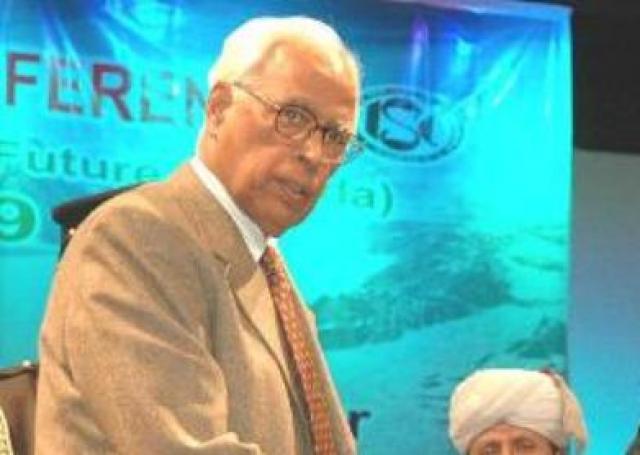 Leh-Ladakh(J&K),October 23 (Vijay Kumar)- Referring to the work being done at the Central Institute of Buddhist Studies(CIBS) at Leh today , The Governor, N. N. Vohra, said that it has played a significant role in propagating the teachings of Buddhism and contributed in a big way in preserving and promoting the rich art, culture and language of Ladakh.

The Governor was addressing the Golden Jubilee celebration function of the Central Institute of Buddhist Studies (CIBS) at Leh today.

He said that the teachings and high moral values, particularly the path of non-violence, propagated by Buddhism have become increasingly relevant in the present day trouble torn world in our endeavours to strengthen the bonds of brotherhood, harmony, peace and amity.

NN Vora said that establishment of CIBS in Leh 50 years ago, has facilitated and promoted opportunities for students and scholars to study Buddhism. Recognizing the important contributions made by the Institute in the last half a century, he added that he strongly favours CIBS being according the status of a . He observed that this would attract students not only from the Ladakh and Lahoul and Spiti regions but from all over the country, and even from abroad, to pursue Buddhist studies in CIBS.

The Governor mentioned that this Institute could act as a role model in providing quality education and urged the Governing Body of CIBS to progressively enable this institution to provide education and research opportunities in identified areas of the Sciences and Humanities. He said that there is also need for providing a much larger number of trained persons to teach Bodhi and reiterated that the glorious heritage of this region needs to be optimally preserved.

The Governor congratulated the faculty members, scholars and students of the Institute, and the people of Ladakh, on the occasion of the Golden Jubilee of this institution, which falls today. He released a commemorative souvenir brought out by the CIBS to mark this occasion.

On behalf of the Institute, the Governor presented cash awards of Rs. 10,000 each to two eminent scholars, Prof. Ishey Thabkhas and  Tashi Rabgias, for their lifetime achievements in promoting the history, culture and language of Ladakh. On his own behalf, to recognize their scholarship, the Governor announced cash awards of Rs. 25,000 each, to both of these scholars.

Earlier, on reaching Leh from this morning, the Governor was received by  Chering Dorje, Chairman, Ladakh Autonomous Hill Development Council,  Ajeet Sahu, Deputy Commissioner, Leh, Senior Superintendent of Police, Leh and other civil and police officers. At the airport, he was given a warm welcome in a traditional manner by presentation of khataks to him.

The Chief Executive Councillor, Ladakh Autonomous Hill Development Council, Leh,  Chering Dorje, addressing the Golden Jubilee function, urged the grant of status to CIBS.  He thanked the Governor for taking keen interest in the overall development of Ladakh region and for always responding positively to invitations to visit Leh.

The President, All Ladakh Gompa Association, Ven. Togdan Rinpoche, said that Golden Jubilee is an important milestone symbolizing the last 50 years’ glorious contribution of the Institute for preserving, promoting and enriching the art, culture and language of Ladakh.

Earlier, the Principal of the Institute, Dr. Nawang Tsering, in his welcome address-cum-presentation of the annual report, paid rich tributes to the late Pt. Jawaharlal Nehru and late Kushak Bakula, founders of the Institute, and dwelt on its functioning and future plans of action.

The students of the Central Institute of Buddhist Studies presented Mangalacharan and a captivating cultural programme, based on folk songs and dances of Ladakh, on the occasion, which was highly appreciated by the audience.

Tsewang Rigzin presented a vote of thanks.