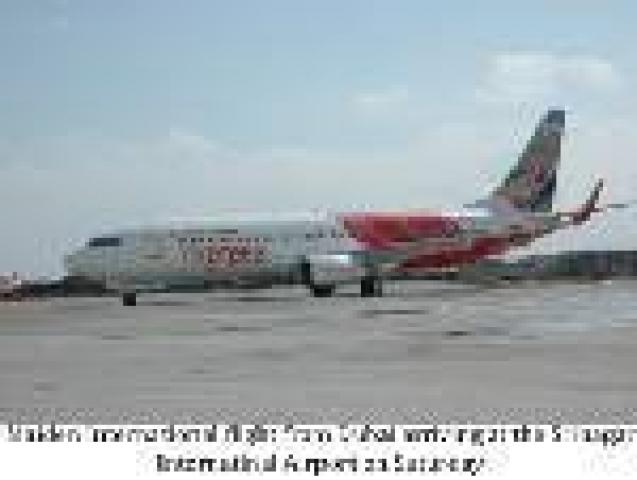 Srinagar,February, 14  – Jammu and Kashmir Chief Minister, Omar Abdullah said that the operationalization of international flights from will give boost to inward tourism in the State. He said connecting with was not a small thing as it opened up the valley for direct international flights which is bound to promote tourism, the mainstay of the State’s economy. He urged the Union Aviation Minister to promote tourism in the State by operating more flights.

Addressing a well-attended function held on the inauguration of the new integrated terminal building of the and operation of the first international flight from here today, he asked the people travelling by air to take advantage of the low fare of Rs. 13,000 from to

Omar Abdullah said it was a moment of joy for the people of the valley that rail-link has been extended to Baramulla, thereby connecting south and north . He said he was among those people who had thought that unless the rail line was connected with the rest of the country, rail in would only be a photo opportunity and bogies would run empty. He said people of the valley have proved this wrong as the rail was running full with passengers comprising employees, students and commoners. He said he was happy that Baramulla was connected with and Anantnag through rail. “We are now eagerly waiting for the moment when will be connected with the rest of the country”, he said and urged the Railway Minister, Mr. Lalu Prasad Yadav, to speed up work on Katra-Qazigund section of the prestigious Udhampur-Qazigund-Baramulla railway project.

The Chief Minster thanked the Prime Minister, Dr. Manmohan Singh, UPA Chairperson, Mrs. Sonia Gandhi and the Central Government for extending wholehearted support to J&K during UPA Government and hoped that the State would continue to receive their help and support. He also thanked the UPA Chairperson for inaugurating three important projects in the valley today.

The Railway Minister Lalu Yadav also spoke on the occasion and said that it was a proud moment for the Indian Railways as the dream to connect with the rest of the country was becoming a reality. He said the Udhampur-Qazigund-Baramulla railway link has been declared a national project and adequate funds were being made available for its completion. He said work was going on the Katra-Qazigund section which passes through difficult terrains, adding that high bridges and long tunnels were to be constructed in this section.

Yadav said that rail-link was important in a place like where roads get blocked due to heavy snow in winter. He said inauguration of the Mazhom-Baramulla section by the UPA Chairperson will connect Anantnag with Baramulla by rail.

The Railway Minister also referred to various projects being implemented to improve connectivity between Jammu and Kashmir and the rest of the country, adding that Rs. 13,666 crore were being utilized on these. He expressed hope that rail-link to the State would boost tourism and benefit the people.

In his speech, the Union Minister of State for Civil Aviation, Praful Patel dwelt on the plans to develop aviation sector in and said that new integrated terminal building though small was one of the finest in the country. He said receives ten flights daily and during summer these increase to 18. He said the air connectivity in the country has been achieved in areas not covered earlier.

Patel said that air and rail-link play an important role in the economy of a place, adding that the Prime Minister, Dr. Manmohan Singh had extended full support for their development in and other remote areas. He said Air will operate international flights from once in a week whose frequency would be increased, subject to the passenger demand. He said Airports Authority of India has drawn several plans for and Leh airports also.

Patel said was very important for the development of the country and Prime Minister and UPA Chairperson have extended their support for development of aviation sector. He said aviation is now within the reach of the masses and that has been the hallmark of his ministry.