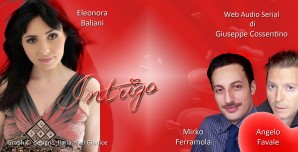 Intrigo, is the second Italian web audio drama, created by Giuseppe Cossentino, after the great success of “Passions without end.”

Set in Naples, the protagonist of the series is Silvia Ferraris (voice of Eleonora Baliani). The main thread of this melodrama drama in 14 episodes of a handful of minutes, revolves around her unfortunate marriage with the developer of luxury villas, Leonardo Ferraris (voice of Angelo Favale) a cruel and despotic, and, l ‘forbidden love that arises between her and Thomas (voice of Mirko Ferramola), the son of Leonardo.

In an escalation of love and revenge, in a long and troubled path where there will be thrills and twists Silvia and Thomas arrive at the coveted happy ending, without many difficulties.

Born of the fruitful mind of Giuseppe Cossentino, defined by the international press, “the author who brings the Italian web radio drama in the world” this new melodrama audio for the web, pointing to the psychological realism of the characters and situations rather than the melodrama tout court.

In his long stories, Cossentino focuses on stories of men and women in which it is possible to identify and dream only by listening to the voice in a screenplay focused and full of developments and events.

The Life of Silvia, Leonardo and Thomas, their private and professional lives become the focus of the whole story ready to enthuse the listener more wary.

As always inside stories, conflict, passion, betrayal, impossible love, and the burning social issues of daily life are interwoven with fantastic stories of these characters are ready to become the new cult icons for the general public of the internet.

The peculiarity of Intrigue is that unlike “Passions Without End” that has a beginning and no end, with so many stories, Intrigue, has a beginning, a story focused and defined on these characters and a plot with a happy ending end making it easy to listen to, follow and totally comforting.

To give the items to the three protagonists, Silvia, Leonardo and Thomas, actors ductile and proven experience ranging from dubbing the movies from TV to theater as Eleonora Baliani, Angelo Favale and Mirko Ferramola ready to dream the internet.

It ‘an audio drama, based on strong all the effects of a “North by Northwest” an interweaving of love and passion always in the background of a well Naples and of a wealthy family, I Ferraris, entrepreneurs luxury villas, one of which Naples nationalized Cossentino used as scope of his characters. But – says the author – will discuss issues of topical themes and deep, the love that saves the most melancholy of a conflict between father and son, psychology and physical violence against women, rape, black market children, all made lighter by the element of the dream, the impossible love story and contrasted Silvia and Thomas, the queen of romantic couple in the series.

As a symbol of Intrigue has been chosen, the hit single, the famous Neapolitan singer Mirko Stella “” You’re mine “while the introduction to each episode with a quote about love will be interpreted by the young emerging actor Michele Germoglio.

The series will be offered in several national Festival, international- and foreign industry to pass once again the tradition of our audio drama from Italian taste in the world.

The star of the series will be up Tuesday, October 21, 2014 21 hours 30 on the appropriate channel on Youtube!