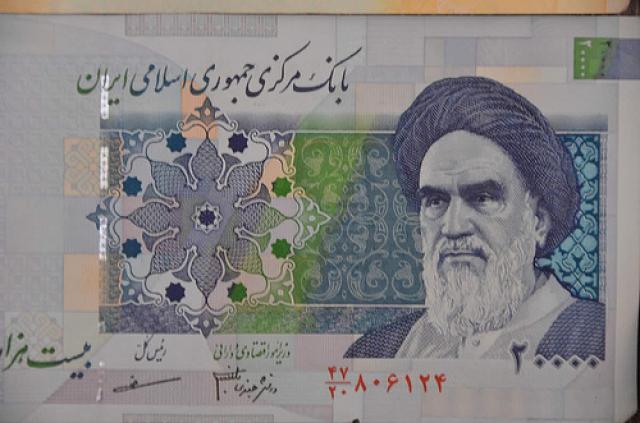 The Iranian rial hit a record low on Tuesday October 2, 2012, yet Iranian authorities appear confused and powerless face to this financial tsunami. Sanctions [1] are being blamed for the national currency’s drop to [2] 34,500 rials against the United States dollar. Only a few days earlier, on Sunday, it was 29,500 rials to the dollar.

Iranian lawmakers have signed [2] a petition to summon President Mahmoud Ahmadinejad to parliament for questioning over the rapid drop in value of the country’s currency.

Meanwhile, the president of Tehran’s Chamber of Commerce, Industries, Mines and Agriculture, Yahya Al Eshagh, compared [3] financial crisis to a war and said “a missile had hit currency square.” In turn, the Iranian president defended [4] his government’s economic policies, claiming the country’s enemies were waging “psychological warfare” against Iran.

On Wednesday, October 3, Tehran’s Bazaar went on strike [5] as merchants and shopkeepers protested the free fall of the currency.

Ahmadinejad denied the rise of the dollar

Several netizens shared Ahmadineajd’s interview from September 2012, calling predications that the dollar would rise to 30,000 rials, just an example of psychological warfare.

Will the regime collapse?

The rial continues depreciate in value compared to foreign currencies, hour by hour, an unprecedented crisis… One faction within parliament accuses Ahmadinejad of being involved in this crisis, while the government’s officials, without presenting any proof or evidence, accuse a group of mafia in the country to be responsible of the sharp decline of rial. Iran’s Leader, Ayatollah Khamenei, and his office have been silent on this topic. Most analysts consider that sanctions against Iran’s nuclear program led to this crisis… in a country where many workers are jobless and several protest just to get their salary paid. Poverty is growing in society, can we anticipate that the rial’s downfall can make the Islamic Republic collapse?

Darzarehbin writes [7] [fa] with irony that in 40 years we will have this piece of news: “Iranian central bank invites people to exchange one dollar to 30 billion rials”.

I hope the currency crisis is solved soon, if this situation persists it can really hurt society… Iranian leaders only pay attention to citizens when there is an election… Iranians are powerless to change their destiny and the opposition is absent. Dark days are ahead of us and everything may collapse. I hope I am wrong.

Iranian people, you are so patient. Know that if this situation happened elsewhere, people would protest and the authorities would resign.

Meanwhole Iranians struggle more and more in their daily life as the rial sinks for sanctions. It seems Iranians have become serial victims of the regime’s repression and the sanctions of world powers.