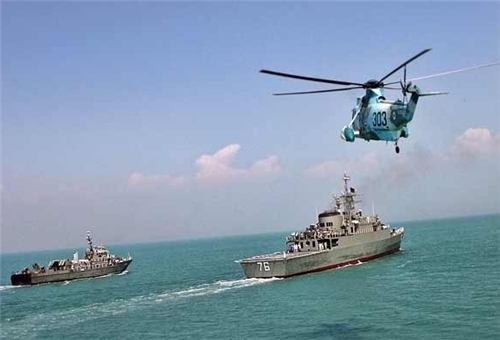 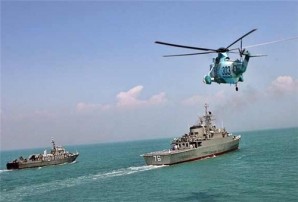 Official photo used in Fars news report of Iranian warships being deployed near the maritime boarder of the United States by Iran. Courtesy Fars news agency in Tehran.

Ships from the Iranian army’s navy are moving towards the United States maritime borders as part of a longstanding protest against US vessels in the Persian Gulf, Fars News Agency reports.
According to the report, quoting a high ranking official in the Iranian navy said:

“The country has sent several fleets of warships to the US maritime borders.”

“The Iranian Army’s naval fleets have already started their voyage towards the Atlantic Ocean via the waters near South Africa,” Commander of Iran’s Northern Navy Fleet, Admiral Afshin Rezayee Haddad, announced on Saturday.

The admiral, who also heads up the Iranian Army’s 4th Naval Zone, added that the ships are approaching the United States’ maritime borders, “and this move has a message.”

In September 2011, Sayyari had announced that the country planned to move more naval warships ( that could contain destroyers, frigates and corvettes) into the Atlantic Ocean to start a naval buildup “near maritime borders of the United States”.
“Like the arrogant powers that are present near our maritime borders, we will also have a powerful presence close to the American marine borders,” Sayyari said.

Source: Fars news http://english.farsnews.com/newstext.aspx?nn=13921119001013
Repeated requests to find out what types and kinds of warships were being deployed, were “declined” by Iranian embassy officials we contacted in Oslo, Norway. Officials cited “operational security concerns”, for not sharing that information with what it called “non-vetted sources”, especially those calling from the United States at the time.
We contacted a Pentagon official on Saturday who (not surprisingly) declined comment on this report, after first trying to blow me off. Later this official, after placing us on hold for two minutes came back and requested I send them a link to the report itself – which of course I complied with immediately.

“You would think or assume in this case the Pentagon would know this stuff and doesn’t necessarily have to rely on outside reporters to be the first to inform them of such things”, I thought to myself after I hung up the phone with that official?