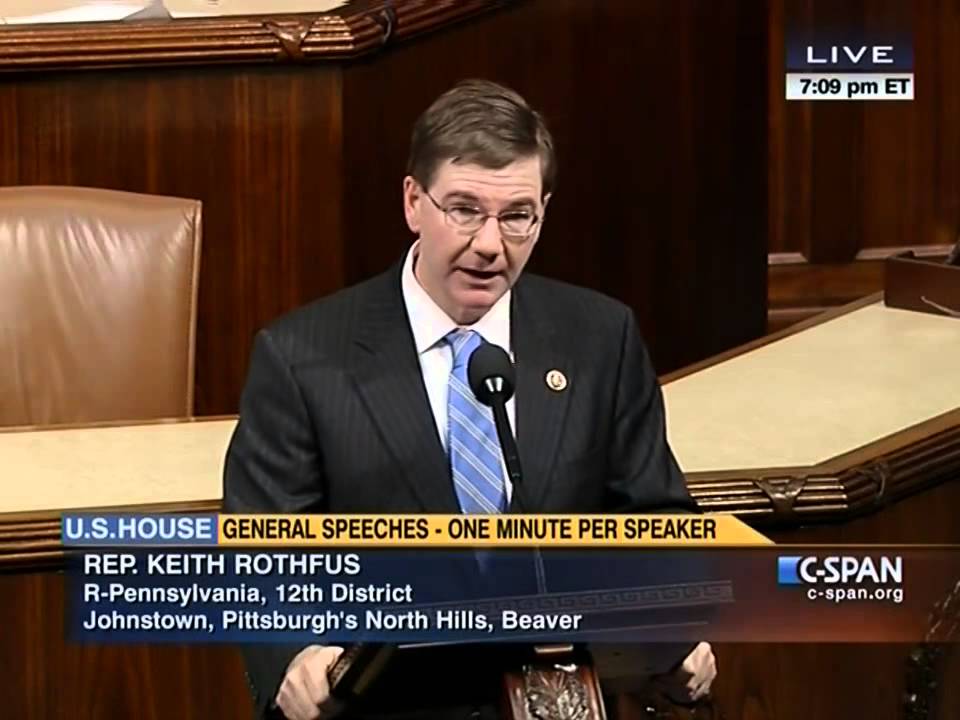 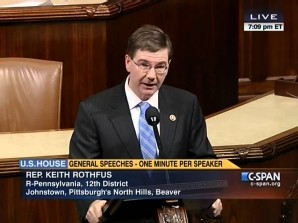 On June 15, 2015 Rep. Keith Rothfus of Pennsylvania asked for and was granted permission to address the United States House of Representatives regarding the P5+1 negotiations with Iran. During his speech the congressman from Pennsylvania  mentioned the fact that Iran has tested nuclear weapons at a “secret facility and undeclared sites.”

What follows is a complete transcript of his remarks:

“Mr. Speaker, this evening, I would like to take some time to remind the American people of the nature of a sworn enemy of the United States, whose leaders to this day, as they have for the past 36 years, continue to chant, “Death to America.”

That enemy, Mr. Speaker, is Iran. Mr. Speaker, the permanent members of the U.N. Security Council–the United States, the United Kingdom, France, Russia, and China, plus Germany, this group known as the P5+1–have engaged in negotiations with Iran in an attempt to halt Iran’s development of nuclear weapons.

Of significant note, unlike the negotiations that we had with North Korea years ago regarding its pursuit of nuclear weapons, those negotiations included the United States and North Korea’s neighbors–China, Russia, South Korea, and Japan. Iran’s regional neighbors and closest targets, however–Saudi Arabia, Jordan, and Israel–were not invited to participate in these talks.

A framework for an agreement with the P5+1 and Iran was reached in April, but that framework is simply inadequate to halt the regime’s march to a nuclear weapon.

Iran cannot be allowed to get a nuclear weapon. Such an event would set off a destabilizing arms race in a region of the world that is already afire with sectarian hatred. It is a real threat that Iran would use such a weapon against Israel, Europe, or with its continued development of long-range intercontinental ballistic missiles against the United States.

Iran’s surface-to-surface missile expansion is a threat typically left out of discussions over its nuclear program, but we cannot ignore that Iran has now built itself the largest and most sophisticated long-range missile arsenal in the Middle East.

The current nuclear framework agreed to in April represents a significant shift in U.S. policy regarding Iran’s nuclear program. Under the agreed upon framework, Iran’s nuclear centrifuges will be allowed to keep spinning for the next decade. This is the first Presidential administration to agree to a deal that allows Iran to continue enriching uranium, thereby legitimizing Iran’s entire nuclear program.

Importantly, the administration’s notion that oversight from international atomic inspectors can keep Iran from developing a weapon is simply not true. For over a decade, Iran has evaded the very oversight body tasked with conducting inspections and monitoring its nuclear stockpiles.

If the past 15 years are any indication, we know that Iran will incur enormous financial costs and wreck its domestic economy, all to continue enriching uranium and developing and testing nuclear weapons at secret facilities and undeclared sites.

In light of the past 15 years, we know Iran will continue to evade the international community just as it did when building and operating its Natanz and Fordow facilities in complete secrecy, concealed from international atomic inspectors.

Those who choose can ignore the writing on the wall and whitewash Iran’s previous violations of numerous international treaties while continuing to operate its covert nuclear program. Those who choose can ignore the hostile rhetoric that still spews from the mouths of Iran’s so-called reformers, including so-called moderates, like President Rouhani, who publicly brags about Iran’s ability to deceive the West, using stall tactics at the negotiating table when, all the while, Iran continues making progress behind the scenes on its nuclear program.

Mr. Speaker, many of us have grave concerns about the deal being negotiated in that it will leave Iran on the path to nuclear weapons while allowing for the complete relief from the sanctions that forced Iran to the table.

I suggest that, even if Iran abandons its path to the bomb, it is completely reasonable to leave the sanctions in place until Iran stops the terror campaign it has been on for the last 36 years.

I simply ask fellow Americans to be skeptical of any assurances that Iran has stopped or will stop pursuing a nuclear weapon. Just 6 months ago President Obama used these Iran negotiations to silence critics who oppose his foreign policy. In an interview with CNN, the President suggested that the year-and-a-half of ongoing negotiations with Iran is probably the first time that Iran “has not advanced its nuclear program in the last decade.”

President Obama didn’t stop there. He went on to assure people that this freeze on Iran’s nuclear program had been verified by the U.N. and the international atomic inspectors, who acknowledge that Iran has not made progress. Yet, we know now that the opposite is true. In the last 18 months of negotiations, Iran has not frozen its nuclear program, by any stretch, but has actually increased its nuclear stockpiles by 20 percent.

Iran’s nuclear program is a very serious problem. But it is only one of the dimensions of the threat that Iran poses to the world. It remains only one part of an overall program of terror that has been carried out by Iran for a very long time.

I wanted to offer this Special Order about Iran today because it is a very important anniversary. Thirty years ago today Navy Seabee diver Robert Stethem was singled out and murdered by Iranian-backed terrorists because he was a United States servicemember. He was only 23 years old at that time, the same age that I was. His murder was at the hands of Hezbollah, an Iran-funded militant terror group aboard the hijacked TWA flight 847. We can never forget the barbaric way in which he was murdered and his body subsequently dropped from the plane onto the Beirut runway.

Master chief constructionman Stethem, we will never forget the sacrifice you gave for our country, and together we pray for your family.

Robert was born in Connecticut to parents Richard and Patricia Stethem. Just as his mother and father had done, Robert followed his family footsteps and signed up to serve in the U.S. Navy shortly before he would celebrate his 20th birthday. He was returning from an assignment in Greece aboard TWA flight 847 headed to Beirut when the aircraft was seized by militants.

Bobby Stethem never got to pursue the hopes and dreams that every American has: settling down, raising a family, and contributing more of himself to this wonderful, exceptional Nation. His parents lost the comfort and grace of seeing a son grow old, and his siblings lost a lifelong friend and companion. And lest we forget, it was Iranian-backed terrorists who put an end to this young life. Bobby Stethem was one victim of Iran’s reign of terror. There have been many more.

Iran’s hostility toward America emerged in full force in 1979 when it failed to protect the American Embassy in Tehran and allowed radical Islamist students to seize the Embassy and take American diplomats and marines hostage, holding 52 of them hostage for 444 days. The attempted rescue of the hostages in April 1980 resulted in the deaths of eight Americans, and Iran bears full responsibility for those deaths.

Throughout the 1980s, Iran funded terrorists in Lebanon who were responsible for the deaths of hundreds of Americans. To recall some of the events: Between 1982 and 1992, Iranian-backed Hezbollah systematically kidnapped 96 foreign nationals, 25 of them Americans. At least eight died in captivity. Some were murdered, while others died as a result of inadequate medical attention.

On April 18, 1983, Hezbollah bombed the American Embassy in Beirut, killing 63, including 17 Americans. Six months later, on October 23, 1983, a Hezbollah suicide bomber drove a truck laden with more than 15,000 pounds of explosives into the U.S. Marine barracks at the Beirut airport, killing 241 marines and wounding more than 100 more. Fifty-eight French paratroopers were also killed.

On September 20, 1984, Hezbollah struck again with another bombing, this time carrying out an attack on the U.S. Embassy annex in Beirut, killing 24 people, including two Americans.

The reign of terror moved from the 1980s to the 1990s, when Iranian-backed terrorists attacked the Khobar Towers in Saudi Arabia in 1996, killing 19 airmen of the United States Air Force.

Iran continued its attacks on Americans throughout the 2000s and the 2010s with its backing of terrorists who killed American servicemembers using IEDs in Iraq and Afghanistan. An article from March 2015 quotes a former U.S. war general who served in Iraq and estimates that Iran was responsible for about one-third of U.S. casualties during the war, which amounts to approximately 1,500 sons and daughters of America who never came home alive.

In addition to its attacks on Americans, Iran-backed terrorists attacked other nations around the world. In March of 1992, Hezbollah detonated a truck bomb at the Israeli Embassy in Buenos Aires, killing 29 people and injuring 240 others.

On July 18, 1994, Iran bombed a Jewish community center in Buenos Aires, which took the lives of 85 innocent civilians and injured more than 300. Again, in July of 2012, Hezbollah operatives claimed responsibility after a suicide bomber detonated a bomb on an Israeli bus in Bulgaria, killing five Israelis and wounding 30 people.

Until Iran stops its export of terror and stops its threats to Israel, the United States, and other nations, no sanction relief should be granted. If Iran does not abandon its nuclear ambitions, sanctions should be increased…”

Congressman Rothfus serves on the following committees and subcommittees in the House of Representatives:

Subcommittee on Oversight and Investigations