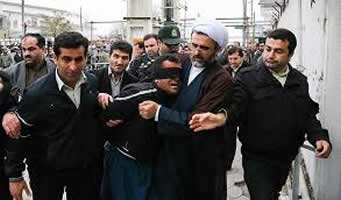 As months have passed following the controversial nuclear agreement signed between world powers and the Iranian regime in Vienna, the mullahs have interpreted this development as a green light to put the gas on domestic crackdown. The regime is always engulfed in a war against the youth, women and political prisoners in its own dungeons, as they comprise the most restive sectors of Iran’s society. While reports of executions skyrocketing over the 2,000 mark under Iranian regime president Hassan Rouhani’s tenure receives media coverage along with measures against the youth and women, the mullahs’ atrocities against political prisoners mainly go unnoticed.

Understanding quite well that political prisoners across the country act as cells of resistance, the regime relentlessly focuses its measures against these defenseless individuals with various types of pressures. Nearly 37 years of their horrific rule over the Iranian people have provided the regime enough experience to impose the most pressure possible on prisoners in shackles.

Gohardasht Prison of Karaj, a city west of Tehran, has always been one of the most notorious dungeons in Iran, both under the Shah before 1979 and afterwards under the mullahs’ rule.
While the Sunni minority community in Iran is always under increasing crackdown, reports indicate authorities in this hellhole have ratcheted up pressures on six such prisoners after their transfer to Ward 8 of this facility on November 1st. This section of Gohardasht Prison is under the supervision of the Revolutionary Guards and known as the “Intelligence Ward” amongst all prisoners. These six Sunni inmates have been under interrogation and torture in this section for over a month now.

In further developments, due to faults in the motor room of ward in Tehran’s notorious Evin Prison the entire section was covered with carbon monoxide gas. Knowing this failure was causing headaches and other difficulties for the prisoners, authorities deliberately refused to take any action and used this opportunity to increase the pressure on the political prisoners. A dangerous risk exists of carbon monoxide poisoning spreading amongst the prisoners and causing extremely harmful illness, yet authorities seem to care less as no action has been taken to remedy the situation. Ward 8 of Evin Prison is known as one of the most appalling of sections in Iran’s dungeons.

Reports from Zahedan Central Prison in southeastern Iran indicate that hundreds of political and ordinary prisoners in different wards are suffering from a very infections virus. With no end in sight the symptoms seen are chills, fever, deep coughs, severe headaches, muscle pains and vomiting. Once again, authorities are not seen taking any action to provide even minimum medical care for the suffering prisoners, allowing the illness to spread throughout the facility. Prison officials in Iran are known to take advantage of such situations to pursue their policies against the inmates, and also bribe resistant prisoners that have not succumbed to the authorities’ demands.

Such atrocities will continue and go unnoticed as long as the international community fails to adopt a firm policy vis-à-vis the regime in Iran, especially on the mullahs’ atrocious human rights dossier. The Iranian opposition, led by the National Council of Resistance of Iran, has pioneered efforts to raise human rights violations in Iran to the attention of international human rights organizations and call for serious action against those sitting on the throne in Tehran. The United Nations High Commissioner for Human Rights, Special Rapporteur on the condition of human rights in Iran and the Special Rapporteur on Torture should rise to the occasion and take urgent measures and conduct a serious international probe into the status quo of all prisoners detained in the mullahs’ dungeons. The regime has to be compelled to allow an international commission into the country to investigate the appalling conditions of its medieval prisons.

Heshmat Alavi is an Iraninan human rights activist who writes for regime change in Iran. Heshmat tweets on @heshmatalavi