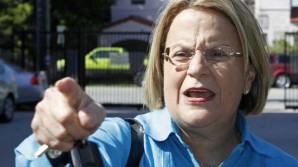 “The Iranian regime cannot be trusted. Yet this administration continues to push for a nuclear deal that threatens our U.S. national security interests’, said Rep. Ros Lehtinen.

On November 14, 2014 Rep. ROS-LEHTINEN asked for and was granted permission to speak on the subject of the nuclear talks with Iran:

“Madam Speaker, as we approach the November 24 Iran nuclear deadline, we should all be reminded that Iran is a U.S.-designated state sponsor of terrorism. Iran continues to violate multiple U.N. Security Council resolutions, and the regime continues to advance its ballistic missile program, a program that has only one purpose: to launch a nuclear weapon. Iran is one of the world’s worst human rights violators and under the so-called moderate Rouhani has been executing people in record numbers.

Yet we recently found out that President Obama sent a secret letter to Iran’s Supreme Leader last month. The Supreme Leader responded by releasing a plan to destroy our closest friend and ally, the democratic Jewish State of Israel.

The Iranian regime cannot be trusted. Yet this administration continues to push for a nuclear deal that threatens our U.S. national security interests.

Madam Speaker, we must not allow any deal to be finalized that we view is not in the interests of the United States of America.”

Note: Rep. ROS-LEHTINEN has no evidence that Iran is trying to develop a nuclear weapon.

With regard to Iran being a state sponsor of terrorism – that is true.

See special report: Iran a self declared state sponsor of terrorism. We reported on that many times https://groundreport.com/iran-a-self-declared-state-sponsor-of-terrorism/