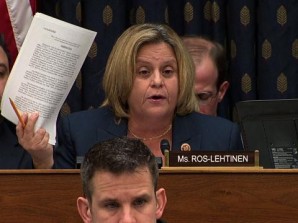 “Through its proxies likes Hezbollah and Hamas, Iran has targeted America and our ally, the democratic Jewish State of Israel, with violent acts of terror for over three decades, including the 1979 Iranian hostage crisis, the 1983 Beirut bombing and Marine barracks bombing, and the 1992 Israeli Embassy bombing and the 1994 AMIA Jewish community center bombing, both in Buenos Aires, Argentina”, said Ros;Lehtinen.

On November 18, 2014 Rep. ROS-LEHTINEN of Florida asked for and was granted 5 minutes to address the United States House of representatives over the question of Iran and its nuclear ambitions:

“Mr. Speaker, we are just 6 days away from the November 24 Iran nuclear negotiations deadline, and as each day passes and we get closer to the impending deadline, we are presented with more and more evidence that Iran is not serious about abandoning its nuclear ambitions.

Here are the reasons why Iran remains the greatest threat to U.S. national security interests:

Iran has been a U.S.-designated State Sponsor of Terrorism since 1984 and has been the foremost supporter for terrorist groups across the world since the Islamic Revolution in 1979.

Through its proxies likes Hezbollah and Hamas, Iran has targeted America and our ally, the democratic Jewish State of Israel, with violent acts of terror for over three decades, including the 1979 Iranian hostage crisis, the 1983 Beirut bombing and Marine barracks bombing, and the 1992 Israeli Embassy bombing and the 1994 AMIA Jewish community center bombing, both in Buenos Aires, Argentina.

Iran has been the chief supporter of Hamas’ and Hezbollah’s terrorist and rocket attacks in Israel like we saw in the year 2006 and 2012 and again just this past summer. In fact, since the Iranian hostage crisis in 1979, the United States has been officially in a continued state of national emergency with respect to Iran, a state of emergency that President Obama just renewed last week.

Tehran continues to demand that it has a right to enrich its own uranium. After operating a covert nuclear program for decades, Iran forfeited any so-called right to enrichment. Yet the centrifuges continue to spin and President Obama has seemingly acquiesced to Iran’s illegitimate claim to enrichment.

The regime in Tehran also maintains an advanced ballistic missile program, a program that just this week it used to threaten Israel and U.S. military bases in the Middle East. And it is a program that continues to expand in violation of several U.N. Security Council resolutions.

Iran also remains one of the world’s worst human rights violators. It is currently designated a Tier 1 Country of Particular Concern, a designation reserved for the world’s worst, most egregious violators of religious freedom as stated by our own State Department and the U.S. Commission on International Religious Freedom. Despite the selection, not a real election, of a so-called moderate last year, Iran’s human rights record has only gotten worse as Iran has executed a record number of people under so-called President Rouhani.

And despite all of this clear and indisputable evidence that Iran is led by a dangerous regime that cannot be trusted, these misguided negotiations taking place right now focus solely on Tehran’s illicit nuclear program, and none of it is based on its other illicit activities.

So while the President continues to try to reach a deal on Iran’s nuclear program at, seemingly, any cost, he has turned a blind eye to the multitude of other threats that Iran poses to us and to global security.

Mr. Speaker, the President and the P5+1 countries are operating as if Iran’s nuclear program exists in a vacuum, and, in doing so, it jeopardizes the stability of the Middle East and the security of many of us in the West. There is every reason to believe that these negotiations are just one big ploy by the Iranian regime, and the Obama administration has fallen for it. That is why it is up to us in Congress to be the counterbalance.

Tomorrow, the subcommittee which I chair will be convening a hearing on the Iranian deal with former CIA Director General Hayden as one of our witnesses. The general has said that right now we are not getting the proper monitoring and verification provisions that we need, and he said were he still advising the President, General Hayden would tell him that this deal could not be adequately verified.

That is why we must take action to ensure that the administration does not agree to a weak and bad nuclear deal, and we must not waver in our resolve. Unless the negotiations result in agreement that ends Iran’s other illicit activities and ensures that Iran will stop all enrichment and will dismantle its nuclear infrastructure, then we must act to impose and strengthen and expand sanctions against the regime, and the administration must walk away and abandon these foolish and dangerous talks.”