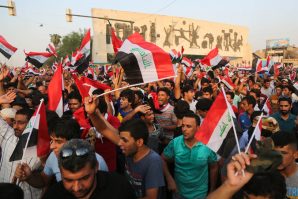 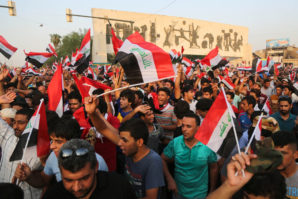 Recent developments in Iraq have largely influenced events in the Middle East and especially this country’s own neighbors. Iran is deeply concerned over the possible crumbling of its Shiite alliance in Iraq, and the efforts focusing on reforms and the introduction of a new cabinet in Iraq. To this end, Tehran has dispatched representatives and delegations to Iraq to stop the trend of reform and patch the disputes inside the Shiite alliance. So far Iran has gradually lost its field influence and military leverages in Iraq, and Tehran no longer has the last word in political disputes. Following the nuclear setback and the signing of the Joint Comprehensive Plan of Action, the mullahs’ rule in Iran has become very weak and the first side-effects of their retreat in the nuclear program can be seen in Tehran’s lost hegemony in Iraq. Despite many efforts by Iran, not a single member of the Shiite alliance in Iraq have succumbed to pressures imposed by Iran’s representatives. This has come with a very heavy price for the mullahs. Iraq is on the verge of a new horizon, being completely in contrast to the Iranian rulers’ objectives. A new Iraq is shaping, in which Iran plays no role in. Considering the military situation on the ground in Iraq, the circumstances prove Iran is losing its hegemony in this country.

In mid-March Iran dispatched Mullah Mohsen Araki, Secretary-General of the Islamic Global Association of Religions Access, along with a large delegation to Iraq. One objective of this mission was to relay a message from Iranian religious leaders to Shiite groups emphasizing if they fail to bridge gaps and unite, they will completely lose control of the government in Iraq and Sunnis will eventually rise to power. Araki met with former Iraqi prime minister Nouri al-Maliki, Iran’s failed element in Iraq. In this meeting, with Danaie-Far, the Iranian ambassador to Iraq, and former Iranian foreign minister Manuchehr Mottaki present, Araki said the most important duty of the Shiite parties, even more vital than their war against ISIS, is to unite ranks amongst Shiites.

In this meeting Maliki said a number of Popular Mobilization Force commanders are calling for his presence amongst these forces to lift their spirits. Considering the low morale amongst the PMF and based on a request mentioned by Maliki, Araki, joined by Mottaki and a number of PMF commanders, went to Iraq’s Salahadin Province and delivered speeches in Arabic in an attempt to lift the PMF units’ spirits.

Araki, in all his meetings with Shiite alliance leaders, attempted to resolve their disputes. However, according to an Iranian regime official inside the Araki delegation, the divides between Shiite leaders had become too deep to be resolved by a figure of Araki’s low stature. His visit to Iraq was scheduled to last a few days and meetings were pre-arranged with all Shiite leaders. However, faced with the mounting rifts in the Shiite ‘National Alliance’, Araki listened to advice provided by the Iranian embassy in Baghdad, ended his visit short and returned to Iran.

To prepare the grounds for Iranian President Hassan Rouhani’s scheduled visit to Iraq and meeting with Shiite leaders, Iran dispatched Kamal Kharazi, head of the Foreign Relations Strategic Council and a close confidant of Iranian supreme leader Ali Khamenei, to Iraq with the goal of meeting with Muqtada Sadr, currently considered an impetus force in Iraq. This meeting was intended to pave the path for Rouhani’s meeting with Sadr. However, despite all the efforts placed by Iran’s embassy in Iraq and the foreign ministry back in Tehran, Sadr refused to meet with Kharazi and turned down a request to meet with Rouhani. Kharazi attempted to specifically prepare these meetings with Sadr through Iraqi Foreign Minister Ibrahim Jafari. However, all these efforts were futile, driving the entire Kharazi trip to Iraq into a complete disaster and forcing Rouhani to entirely call off this important visit.

Delivering an evaluation of his report to Iran’s Supreme National Security Council, Kharazi said the National Alliance in Iraq is suffering from the positions adopted by Maliki and the difference raging amongst various parties, especially due to this entity lacking a leader. The differences are too deep for Iran to simply appoint a leader and resolve the disputes, he said, adding Tehran’s should simply focus its efforts on preventing the scope of these differences from escalating. Kharazi went on to add the necessary solutions needed to prevent the Shiite coalition from crumbling would be futile without Muqtada Sadr’s participation. Maliki and Iraqi Prime Minister Haider al-Abadi literally have no role in Iraq’s current political atmosphere, he added in his report.

Iran is deeply concerned of the recent turn of events in the political landscape of Iraq will result in a segment of the Shiite coalition distancing itself from Tehran. As a result, the mullahs will no longer enjoy full hegemony over Iraq’s Shiite parties. Internal disputes amongst the Shiite coalition and political measures carried out throughout Iraq prove the mullahs have lost their influence over Shiite parties. Iran’s weakened hegemony in Iraq is a signal of the fall of all Iraqi parties linked to Iran.

Will the top brass ruling Iran and the Quds Force – in charge of the Iraq dossier – once again place their bets on a losing horse such as Nouri al-Maliki? The coming weeks will show how the scale will tip, in favor of Iran or the suffering people of Iraq who are sated to the point of disgust and bored beyond endurance.

Filed under: News, Politics
Share Tweet Pin G Plus Email
previous article: The Way For Peace With Enemies Is By Righteousness And Wisdom
next article: The Iran regime’s refusal to join the OPEC meet is a strategy to deflect attention from their bigger ambitions